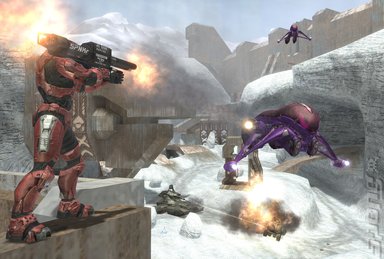 Shot down!
All Images (4) »
The release of Halo 2 on the PC has slipped a week, according to major UK retailers.

GAME, Amazon UK, HMV and Virgin Megastores are all listing the release date as May 25th, a week later than the previously expected date of May 18th. It has similarly slipped from May 8th to May 25th for US retail.

SPOnG contacted Microsoft for confirmation of the slip, but it was not able to give it at the time of press.

Of course, retail has been known to get release dates wrong in the past. With Halo 2 this close, however, and so many retailers agreeing it seems unlikely that they're wrong.

The slip's something of a blow for Microsoft. May 18th is the launch date for Windows Live here in the UK, and a killer-app (albeit two and a half years after the Xbox release) playable only on Vista would have served Microsoft well in pushing the operating system.

It's not been a great day for Microsoft, all in all. The slip comes in the wake of some (at best) embarrassing comments from the president it's of Entertainment and Devices Division, Robbie Bach.

At least we have Wednesday's new Halo 3 screens and artwork to tide us over until we get our mitts on the new maps and map editor in the Halo 2 PC package.
Companies: Bungie Microsoft
Games: Halo 2

Now how do you feel about this retro shooter being only playable on Vista?

Killer app? Methinks this particular strategy was thunk up on the same day as an interview with Mr Bach.

I bought an XBox to play Halo 2, and it was a good experience, but not worth buying an XBox for on its own. This isn't going to make me buy Vista, so I suppose I won't be buying this.

From my perspective, it seems like it wasn't really "worth" making Halo 2 for the PC so late.

Here's the strategy I recommend: release Halo 3 on XB360 and Vista, with less of a delay between platforms.

If you want to play Halo 2, buy a second-hand XBox if you don't already have one.

If you want to play Halo 2, buy a second-hand XBox if you don't already have one.

anyway I remember playing halo1 on pc and it *sucked*. atch, that was about 2 year wait, iirc, so I guess we might expect the same sluggish jerky frame rate from halo2.

Take that rabid fan base and mix in a rather fully featured level editor for multiplayer and this will easily sell a ton. Sure halo3 would help to move vista more than halo2, but it would also probably take away from 360 sales and the console division is where MS needs the most help. It seems to me they are already making a mint with vista, this is just a nice lil bonus to help people "jump in".

I personally wont bother, but as soon as someone figures out how to get PC designed maps running on a modded xbox1 I might just have to get the old boy chipped.
________

OptimusP 7 May 2007 19:21
6/6
I think everyone stopped caring when they realised the in-door levels ran slower then the out-door levels in Halo-PC because of some stupid shader-tech.
Posting of new comments is now locked for this page.