Voice Of God Sues Over Madden Use

First down and SUE! 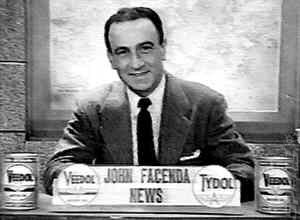 John Facenda: Voice of God
Okay, so over on this side of the pond where we don't have to dress up in crash helmets in order to chase oval bladders around the place we've never heard of John Facenda. He is a now sadly deceased sports commentator. In fact, Stateside, he's apparently as famous as John Motson or Murray Walker in real life. In fact, he's so revered that his voice has been compared to that of God.

The NFL - the body that controls the helmet-wearing, stoppy-starty bladder-chasing sport - is being sued by 'the voice of God's" son (called not "the voice of Jesus" but somewhat more predictably, John Facenda Junior) for using his pa's vocal wonderfulness in a 22-minute TV show about the making of the Madden video game franchise.

Despite U.S. Magistrate Judge Jacob P. Hart chucking out Facenda-minor's claim for invasion of privacy, the judge has allowed Junior to take the NFL to court for use of his dad's voice three times in the documentary. Paul Lauricella, lawyer for Facenda-the-younger puts the reason for the litigation on the line in such a tasteful manner that we just have to quote him:

"'He does not want to wake up one day hearing his father's voice advertising condoms."
According to the Associated Press, Facenda-the-less-elder has a 1-from-1 rating in him versus the law, having successfully sued Campbell Soup for using a sound-a-like of his pa to advertise its wares.

Rod Todd 5 May 2007 07:23
1/2
What if someone genuinely sounds like this man Facenda? There is only a certain gamut of American male voices, and 150,000,000 that have to find a unque vocal mosulation from within it. And what if this man who genuinely sounds like Facenda seeks to find a career in voice-acting. Uppity Facenda jr has now effectively restricted this man's ability to make a livelihood. In Europe, at least, I am pretty sure that this theoretical man could sue Facenda jr under human right legislation.

And the uppity young bastard would deserve it. I'm guessing Facenda Jr has no real skills of his own, and that his inheritance is running a little low.

But that inheritance came from his father making the tonal values of his voive a matter of public record, for which I am sure he was remuerated admirably. His two-bit son should shut the f**k up, and the law is an arse.

PreciousRoi 5 May 2007 10:50
2/2
Rod Todd wrote:
What if someone genuinely sounds like this man Facenda? There is only a certain gamut of American male voices, and 150,000,000 that have to find a unque vocal mosulation from within it. And what if this man who genuinely sounds like Facenda seeks to find a career in voice-acting. Uppity Facenda jr has now effectively restricted this man's ability to make a livelihood. In Europe, at least, I am pretty sure that this theoretical man could sue Facenda jr under human right legislation.
*pukes* human rights violation?

Bah, I'm pretty sure the only reason Campbell's lost that one is it was a blatant attmept to fool people into thinking it was actually Facenda. Had the Campbell's ads in question not featured music by (or an unreasonable facscimile thereof) Sam Spence (Composer for the Voice of God) he prolly woulda got thrown out of court. You wanna be a voice actor who sounds just like Facenda? Fine, but trade on your own talent, if you truly have "The Voice of God" I'm sure you won't lack for work, its a great voice. Perhaps Steve Sabol has a job somewhere, I certainly wouldn't see that as disrespectful or improper, if unoriginal. But outside of this possibility, do your own thing and keep the Spence outta the background. Of course, parody and satire would be acceptable and indeed protected forms of speech, but I don't think flogging soup falls under either.

Do you know anything at all about this kid? Or are you just lashing out on a whim?

I don't know anything about him myself, nor do I care particularly. This case has the potential of creating precedent in this area, that is of interest. This kids personal faults, much less so, lets try and keep on topic and relevant here... Even if, and I have no reason to believe this is the case (or conversely not the case), the kid is a trust fund brat out to milk his fathers legacy for all its worth, if some kind of sensible ruling results preventing corporations from abusing intellectual properties (not that I believe this is the case here, but even a ruling in the defendants favor could have precedent implications in favor of future plaintiffs) then he will have performed a service for those more worthy and talented than himself.

The central issue here devolves upon a simple question: Should corporations be able to do things with your voice and/or likeness that they wouldn't be able to get away with if you were still alive?

Once again, in my opinion Facenda Jr. should lose this case, but if anyone ever does try to use his father voice for a condom commercial, I hope he sues the pants off them.