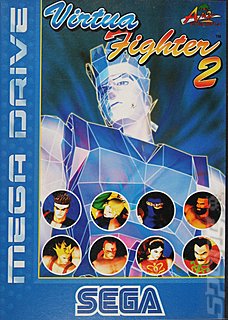 All Images (3) »
It's another SEGA love-in on Virtual Console this week, with three new SEGA classics entering the fray. This seems to be becoming a pre-bank holiday event for Nintendo, with the last SEGA -heavy Virtual Console week coming just before Easter. Virtua Fighter 2, Wonder Boy in Monster World and Alex Kidd in the Enchanted Castle all hit Nintendo's download service today, while Shockman represents for HudsonSoft.

First up is the venerable Virtua Fighter franchise making its first appearance on the Wii. It's bloody welcome, too, since the Wii's a bit lacking on the beat-'em-up front. Players get nine fighters to choose from and none of this namby-pamby fireball stuff. It's all about getting up close and personal. The version we're getting on Virtual Console hit the Mega Drive in 1996 and costs 800 Wii Points.

Next up is Wonder Boy In Monster World, first released in 1991. We know what you're thinking, and no, it doesn't spin out of a Tenacious D song. The game mixes classic platforming with RPG elements such as talking to humble townsfolk and upgrading weapons and armour. Like Virtua Fighter 2, the game comes from the Mega Drive and costs 800 Wii Points.

Rounding out SEGA's Virtual Console offering this week is Alex Kidd in the Enchanted Castle, first released in 1989. Another platform classic, the game sends Alex Kidd off to the planet Paperock to save his old man, King Thor ('Thor Kidd'? Just goes to show that our knowledge of Norse mythology isn't up to scratch). Like its SEGA brethren, Alex Kidd in the Enchanted Castle was originally released on the Mega Drive and will set you back 800 Wii points.

HudsonSoft's Virtual Console offering this week is 1991's Shockman, or, if you translate the original Japanese title, Restructuring Super Human Schbibinman 2: A New Transforming Enemy. The title was originally released on the Turbografx and pits Arnold, a heroic chef, against invading alien hordes in classic side-scrolling shoot 'em up style. It'll cost you 600 Wii Points to save the world with Shockman.