Latest From LucasArts: Fracture For PS3 And 360 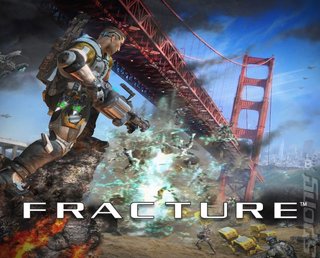 Image from official Fracture website
All Images (10) »
LucasArts has just announced a new PS3 and Xbox 360 shooter it's calling Fracture.

Fracture's being developed by Day 1 Studios, who most recently worked on Vivendi's F.E.A.R. The game's story involves your typical sci-fi the-world's-on-the-brink-of-ecological-disaster fare, with cybernetically enhanced soldiers duking it out with a genetically modified opposition.

If you're thinking something to the tune of ?uh, another sci-fi shooter,? then you should hold it right there. What promises to make Fracture different, if not great, is the terrain deformation gameplay mechanics. Normally ?terrain deformation? is code for ?we've got a racing game that doesn't do anything our last-gen racer did except look prettier.? Not here, however.

Your character's a demolitions expert, and he works with weapons specifically designed to use the terrain against his opponents. Pop a grenade up in the air and instead of getting a bang you'll get a huge sinkhole that drags all your enemies into the bowels of the earth.

LucasArts tells us that Fracture will be out in summer next year. You can find out more on SPOnG's dedicated game page. To find out how Day 1 Studios' last outing, F.E.A.R., played head this way for SPOnG's review.
Companies: Day 1 Studios LucasArts
Games: Fracture