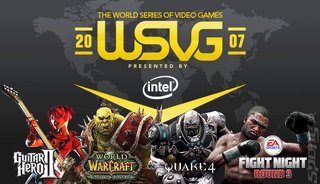 The 2007 World Series of Video Games has started in Wuhan the capital of Hubei province in central China - so if you and your team aren't already there, someone's mum forgot to set the alarm clock.

Unlike the recent Agatha Christie-like tedium of the cricket World Cup, however, the WSoVG '07 only lasts for two days. Equally unlike the batty, bally Cup, the current China-based comp features Counter-Strike 1.6, Quake 4, World of Warcraft PvP and Warcraft 3: The Reign of Chaos and Ł350,000 worth of prizes.

The fact that the World Series is being played out in China appears not to have bothered any of the mainstream media, which you would usually expect to start banging on about how the Chinese are always pirating games, have no interest in games and are about to explode into the world of games publishing, all in the same article.

Are you at the World Series? Are you planning to play? Tell us in the Forum.

Head over here to the official site for live streaming video of other people winning all that cash. Maybe next year, eh?
Games: Counter Strike Quake IV World of Warcraft