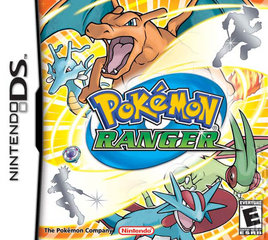 It's good news for Nintendo this morning, with the company grabbing its first all formats Number 1 in four years for a first party game and otherwise 'pwning' the Top 10.

The DS exclusive Pokemon Ranger knocks Teenage Mutant Ninja Turtles down a peg to give Nintendo its first home-grown Number 1 since Pokemon Rubyon the GBA four years ago. This is the sixth Pokemon title to hit Number 1 in ten years.

The news isn't too bad for Ubisoft, however. TMNT only slips one place, occupying the Number 2 spot vacated by Pokemon Ranger.

At Number 3 there's more good news for Nintendo, with Wii Play storming back into the All Formats Top 10 this week after having dropped out of the Top 40 altogether at one point. It seems all Nintendo has to do is manufacture some Wii Remotes for the title to sell. Since Nintendo can't even supply enough Wiis to meet demand, however, we probably shouldn't hold our breath for a continuous supply of peripherals.

Rising Star's farming sim, Harvest moon DS, is the only new entry in the Top 10, entering the chart at Number 4. SPOnG suspects it could have been a Number 1 if only Rising Star had included a 'moan about the EU' mode. Along with Dr Kawashima's Brain Training at Number 6, Pokemon Ranger and Wii Play, Harvest moon DS helps Nintendo platform-exclusives make up a hefty 40% of the Top 10.

The rest of the top quarter of the charts is all quiet shuffling and not a lot of action. For the full list you can click here.

There are a smattering of titles making their first All Formats Chart appearance. The DS continues to fare well, with Nintendo's own Hotel Dusk: Room 215 debuting at Number 22 this week, while All-Time Classics re-enters the fray at Number 21 and 505 Games' Cooking Mama spoons its way in at Number 35.

The PS3 and 360 port of Vivendi's F.E.A.R. (a review of which can be found here) bumps the game back into the chart at Number 17. The only other new PS3 title this week is The Godfather, but it fails to break into the All-Formats Chart.