Unachievable@Home ? is the new mantra of those working in out-of-home interactive entertainment. 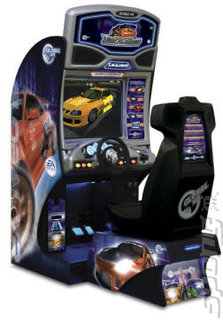 Need For Speed: Underground
All Images (6) »
One of the three formats of game genre that is ever-green for amusement - the driving format - benefits from the creation of a realistic driving cockpit to experience the thrills of high-speed action within. No matter how much console developers manufacturer force-feed-back steering wheels to play consumer games, they are left in the cold compared to the latest fully stocked arcade driving cockpit.

The creation of high-octane arcade driving action has seen some impressive newcomers in recent months. American developer Raw Thrills, headed by industry supreme, Eugene Jarvis, has released its third sequel of the motion picture license with The Fast and the Furious: Drift; the encapsulates the fundamentals of what makes successful arcade racing. Raw Thrills has bottled the fast, frantic and fun requirements of drivers in this market.

The developer added physicality to this list with a super-bike variant on the theme The Fast And The Furious: Super Bikes players riding a stylized bike interface. All the games in this series have super-stylized graphics and intense race and crash action; offering a compelling multi-player race experience, but also increasing the longevity of the title by a unique player password system allowing customised vehicles to be stored and reloaded by players.

The need for intense street race action, in a familiar package saw another American developer take the popular Electronic Arts driving property and licensed it for amusement application. Global VR has released onto the market Need For Speed Underground ? and a update of this based on the new Carbon consumer release is expected next year. In this case the player is able not only to compete in conventional multi-player races, but also undertake a career-mode saving their progression through the ranks and car customisations ? using a player VIP Card (memory cards that retain player data).

The hardcore arcade underground players have been reveling in intense customised street car action, in this case based on two highly popular Japanese manga series. The SEGA title, Initial D4, the latest version of the sleeper hit, offers players a chance to compete in a highly technical driving experience round the deserted streets of Tokyo and its suburbs. The game offers an ever increasing battle against fellow racers challenging to rule the streets.

The arcade game enables the player to store their achievements on a special memory card. A memory card is also used on the Namco Bandai Games street racer Wangan Midnight Maximum Tune 3. Again based on a popular manga, and again based on gruelling street combat on deserted Tokyo streets, this version offers a less highly technical, and more fast pace arcade racing experience ? this level of amusement driving is a unique genre without a true consumer equivalent.

Namco Bandai Games has also used this cabinet and memory card platform for its much softer Mario Kart: Arcade GP 2, a driving game that borrows all from the console game series. Aimed at a much younger audience, the ability to save game progression and vehicle customization is a growing trend in titles for the market.

More conventional arcade street racing has been supplied recently by Konami Digital Entertainment with Crazy Streets: Thrill Drive. This game offers a wide selection of different vehicles to undertake a cross-country endurance race, with the ability to collect special feature to beat the opposition along the route. This title is the third in the Thrill Drive series, earlier versions claimed to be the inspiration for the Climax?s BurnOut series of console race and wreck games. The recent need for a game that offers a fast-pace driving experience in the arcade has seen veteran amusement developer, Taito, revisit its popular police chase driving experience with the sequel Chase HQ 2.

The creation of a compelling experience can also see the fundamentals of arcade drivers supercharged. SEGA has recently released OutRun 2 SP Special Attraction, which takes the highly popular Ferrari car-fest and encapsulates it in a highly specialised motion cabinet eight-player attraction. The players in four motion capsule have twin driving positions, their cars controlled alternatively depending on driving skill ? this highly frenetic experience provides a new level of amusement thrill that marks the future for the sector.

Initial D is based on the japanese manga. You don't need to add the 'comic' bit, unless it's between these ( and ) and after the comic word.

I have the first Initial D game on my PSP, and its no push over as a game. Think a second one is due out soon for PSP( in japan) , if not its Wangan Midnight it'll be something else.

Chase HQ 2, wonder how that plays?

editor 24 Apr 2007 10:17
2/3
All those games listed, bar 'Crazy Streets' have been given UK and US street dates so you WILL be seeing them. There seems to be this common cry from some sources when I cover arcade titles, saying "...oh they never make over here!" Yes they do its at your local bowling alley at you local cinema and at your local family entertainment center. I know that if your not in a city then this is not so local - I am thinking on a arcade machine finding service but if you are in the US go over to Barcade.com

You will understand that I am not focused on the consumer scene so I will have to take your word that the ID PSP has any level of comparison with the arcade version and all its technical game play.

Regarding Manga and comic - if the reader is new to the genre then yes you DO include the comic element, so they don't get confused with Manga toys, Manga characters and Manga Cosplay.

Finally, I have intensively played CHQ2 and feel it is a fun and compelling arcade chase game. The two player linked mode is also a great new feature - the machine is already placed in the UK and is on test in the US.

The Absinthe Review Network 24 Apr 2007 16:25
3/3
Hold on there a second. Just because an arcade title makes it to the US, does NOT mean they're going to make it to "your local bowling alley" by any means. I don't know how recently you've stepped into an arcade, but unless you're in the #1 arcade in a major city like New York the chances of you seeing high profile titles like Virtua Fighter 5, House of the Dead 4, or any of the just mentioned titles is practically zero. Arcades these days are no longer simply arcades, they are also a go cart centre, a pizza joint, a skating rink, because a business simply cannot survive being JUST an arcade anymore. Sad, but true. Believe me, I wish this was not so just as much as the next old-school arcade junkie. Also, for these awesomely extravagant games such as F-Zero AC or Outrun 2 keep in mind they have a much heftier price tag than the generic racing game, and many owners refuse to shell out twice as much money for a cabinet that will provide only a modest increase in return...

What you will find is a very play-it-safe variety of games. Lots of racing titles, as they are much less intimidating to the casual gamer, but not brand-spankin-new racing games; we're talking Cruisin Exotica era here. "And why not?" arcades will ask themselves; after all the casual arcade players don't know nor would they even appreciate the difference, not to mention as long as business is merely decent they'll have their pizza parlor or go-kart sales to fall back on. Then of course you need a casual fighting game cabinet, which usually means Tekken, not Virtua Fighter. I have actually seen a few VF4 cabinets after much searching, although they were the original version and not the upgraded, tweaked version. Light gun games may be the exception, as they are always popular among almost any arcade dweller, so you may actually be playing the new Time Crisis 4 instead of 2 or 3. And then of course, you need a title that is very different and will bring crowds, DDR/Pump being the most obvious choices these days. And basically the owners will say that's good enoug and fill the rest of the space with a Pac Man ansd a couple of old Deer Hunting or golf games that no one will touch, but hey they need SOMETHING to fill the rest of the space, right? Toss a pinball pinball machine (that will undoubtedly break every other day) in the corner and a few ticket games for the kiddies and you've got the average US "arcade", if you can even call it that...

...I do applaud Spong for reporting the arcade happenings, though. Keep it up, my friends.