?Felt the need to keep the game concept fundamentally the same? 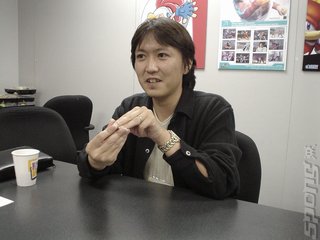 Journey Of Dreams producer Takeshi Iizuka
NiGHTS: Journey Of Dreams is, without any doubt, our most highly anticipated third party title currently in development for Nintendo Wii. It?s been eleven years in coming, and we hope and pray that the wait has been worth it.

NiGHTS: Journey Of Dreams producer Takeshi Iizuka (pictured right) certainly understands the hopes and the depth of feelings that fans of the original still have for the game, telling a recent interviewer:

?For those loyal fans that have waited 11 years for NiGHTS to return, I felt the need to keep the game concept fundamentally the same as the original so that it would be a reminiscent return to their past NiGHTS experience. This way, I could extend my thanks and appreciation for all those fans that waiting all this time for the sequel. To them, I want to say "Thank You" for without their support this project would not be possible.?

?Ever since NiGHTS was released 11 years ago, I've always dreamt of making the sequel , and now I am able to deliver to those you how have patiently waiting so long, a new NiGHTS game! Over the years of my involvement of creating past Sonic titles, neither the market nor platforms seemed right in recreating the sequel...that is until Nintendo released the Wii. So now, it is my chance of saying thank you for all your loyalty and trust. I hope you will love "Journey of Dreams" as much we do making it!?

Iizuka goes on to add, tantalisingly, that, ?Additionally, we are planning expand on the original to include a variety of new gameplay mechanics that I hope fans new and old will enjoy.?

More new details on NiGHTS: Journey Of Dreams include the fact that the ?mood-enhancing? soundtrack will be taken care of by Mr. Hataya, the original music composer, gamers will be able to use motion-control with the Wii Remote or more traditional control via the Nunchuk.

The Absinthe Review Network 23 Apr 2007 21:01
1/1
Thank goodness they're not overhauling the gameplay. I think a lot of fans have been holding their breath up until this confirmation (I know I was). Also, it is a nice option to have multiple control setups so one can opt for the new-age Wiimote control or stay true to the classic analogue control setup. Personally I think I will stick with the Nunchuck's analogue stick myself.

As far the "mood-enhancing" aspect is concerned, it's true I did feel as if it was constantly a very relaxed atmosphere. I realize ultimately a stage should be completed to perfection as to attain the highest grade, but there were so many other aspects such as the rather deep exploration and interaction with the environment for a title with 2D-style gameplay. The bright colours and friendly environments also just really brought this game to life and gave a sense of a very surreal experience (for the time, anyway). I remember the first time exploring underneath the waterfall and being suddenly swept into an underground water tunnel , abrubtly switching to a follow cam and an alternate control scheme (but it was implemented so seamlessly the controls were obvious) and bursting forth on the other side, once again being blinded by the glaring sunlight...its moments like these that make a game great. The boss fights were also very creative and boasted a feeling of beinga part of something epic. And of course, the newly introduced analogue controller (included) made your character control as smooth as butter. It is also my favourite controller of all time, as I have slightly small hands and it fits more perfectly than any controller to date.

If anyone here has yet to play Nights, I highly suggest doing to so before the sequel is released...