Who is playing what on the train... 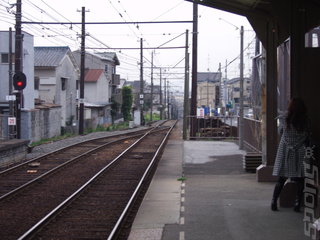 I've just downloaded the new 1.7 firmware to my PS3, which promises that we'll be able to download PlayStation games from the PS Store and then play them on the PS3. No need for a PSP. Too bad none of the original PlayStation games on the PS Store right now are compatible with this new service - try downloading them and you'll still be asked to plug in a PSP via USB.

It's particularly a shame for PS3 owners here in Japan, because we have access to quite a few Japanese PSone classics in the 'PSone for PSP' range: IREM's mighty R-Types (and R-Type Delta), Sunsoft's Neo-Geo sci-fi beat 'em up Galaxy Fight, Raiden, Bishi Bashi Special, and even the original Biohazard.

In Japan, new 'Game Archive' titles (read: PSone classics) are released via the PS Store on the last Friday of every month, so we'll have to wait until next week to find out whether Sony plans to unlock the 'PSone for PSP' range already there to make it something akin to 'PSone for PSP/PS3'.

In the meantime, I'll be playing some downloaded PSone oldies on my PSP when I take the train to Osaka (for more games shopping, of course). And I'll do it even though I'm in full knowledge of the fact that the PSP in Japan has a narrow demographic of users: the only other people playing PSPs in public in Japan are school-age lads, university students, and scary otaku types. And the businessman drones - mustn't forget them.

With the DS, it's a completely different story. The otaku/school kids/suits do use their DSs in public, of course, but they are vastly outnumbered by an army of mothers and daughters, young couples (usually co-operating on some training game), children, and a growing number of game-savvy senior citizens. Me and the missus, we've been playing through Layton together on most train journeys in the past month. Great fun. Plenty of others are digging Layton, as well - it's close to selling half a million units here. As of next week, though, I think we'll migrate to Gyakuten Saiban 4 (the latest instalment of Capcom's supreme Phoenix Wright games), which has just been released here (see the trailer below).

The point is: regardless of what they're playing/tapping/listening to, you'll never see a bored face on Japan's public transport. (And the trains are never late.)