Developers give us the techie stuff 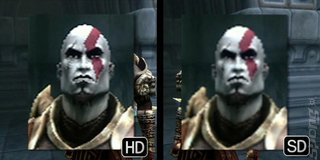 All Images (4) »
Sony has provided a detailed statement explaining the lack of the secret 480p mode in the PAL version of God of War II, despite the fact that it's accessible to Americans.

All in all, it looks like a storm in a teacup to SPOnG - but many other media sources appear to be getting hot under the collar about the whole thing, so here is the actual detail.

The statement, which comes from the game's development studio, acknowledges that the inclusion of multiple language audio tracks for the PAL version of the game means there is no space for a HD option. It then adds,

"However even if the game only featured English it would still not have been possible. This is because everything in the game has been optimised for PAL (576i), including the movies. The God of War games are famed for the seamless transition between gameplay and cutscenes, and if we had kept the movies in NTSC resolution, there would have been a very noticeable, very jarring transition between the two display formats. The only compromise would have been to have featured the movies in both PAL and NTSC resolutions, but as evidenced by the struggles the development team had to even fit localised audio onto the disc, this was clearly not an option..?

The ?jarring? Sony refers to would be a switch between 480p gameplay (with borders at the top and bottom on PAL screen) to full-screen 576i (no border) during cutscenes. The border you could probably live with - any European gamer who's played sloppy rush-jobs of US or Japanese games has done just this - but the jump between 480p and 576i would produce a very noticeable interruption in the picture while the TV, monitor or projector re-syncs.

Sony goes on to justify the decision by stating,

"Ultimately, the decision fell to what would benefit the majority, and the number of European PS2 owners who own a component cable and the necessary equipment to display 480p output is extremely low compared to those who are playing on CRT sets, or indeed on HD sets via a composite/RGB SCART connection.?

(SPOnG would like to point out that the same small number of Europeans with the necessary equipment to support 480p on the PS2 is a large part of the PS3's potential customer base. Just saying.)

"Development of the PAL version ran extremely closely alongside the NTSC version, and to have asked the team to develop a similar bonus mode for the PAL version would have distracted from their efforts to get it into the best shape possible.?

To SPOnG's ears that sounds suspiciously like ?couldn't be bothered.? The development team did somehow manage to find time to squeeze it in on the NTSC version, after all.

What we'll happily accept, however, is Sony's point that ?In addition, it would have required additional QA testing that would have a resulted in substantial delays to the game's release.?

Sony does point out an upside to being a PAL GoW fan, however. It points out that, when played on a PAL PS3 with a component or HDMI lead and high-def screen, we'll get true 576p, a benefit not available to our cousins across the Atlantic. S

We've been playing PS2 games in plain old regular resolution for years now, and one more won't hurt us. Throw in the fact that 480p isn't true HD anyway, without a massive improvement in quality and it doesn't really seem worth getting hot under the collar about.
Companies: SCEE
Games: God of War 2

wtf 18 Apr 2007 22:52
1/3
I've played a few PS2 games now on PS3 and everytime the game start I get 576p output on my TV using HDMI. There's a problem, everytime the game runs in 576p and this is PAL 50hrtz, the picture sucked ass. Changing the refresh rate to 60hrtz will get me 480p which is a much cleaner and sharper picture.
In 576p you get a double effect on the picture which make it hard to play the game,its like having the 2 same images together but they're slightly off from each other. You notice the doubling effect more on the writting. In 480p the double effect is gone.

Remember how the PS2 games looked on PS3 before the firmware update fixed this. This is how the games will look in 576p before the update.

config 19 Apr 2007 08:02
2/3
wtf wrote:
In 576p you get a double effect on the picture which make it hard to play the game,its like having the 2 same images together but they're slightly off from each other. You notice the doubling effect more on the writting. In 480p the double effect is gone.

This sounds like the output isn't being de-interlaced properly in 576p. Does it look something like this?

Prolly be fixed in a future firmware update -still sucks, though

thats how things will look to me later tonite