The Charts: Has Imagination Finally Died? 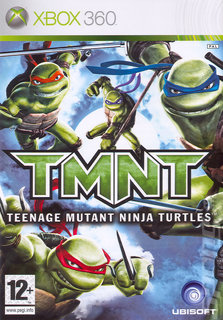 It's an uninspiring week in the charts as the Top 10 has barely a sniff of original IP. Dr Kawashima's Brain Training is the only title up there that isn't either a sport's tie-in, sequel or license.

Topping off the dearth of creativity is Ubisoft's all-formats Teenage Mutant Ninja Turtles, climbing from the sewers of the Number 2 spot to dislodge Command & Conquer 3: Tiberium Wars and claim the Number 1 spot.

The only new release in the All-Formats Chart this week is Nintendo's fourth crack at Pokemon on the DS, Pokemon Ranger. Just behind it Ubisoft shows its face again at Number 3 with its super-budget re-release, Rayman 2: The Great Escape for the PC.

Codemasters' Brian Lara International Cricket 2007 is one of two sports releases in the Top 10, coming in at four under par (or Number 4, since SPOnG's knowledge of how golf scoring applies to entertainment charts is dubious) - the next-gen (and PS2) title climbs up five places from Number 9.

Number 5 is where EA's Command & Conquer 3 on the PC lands following its fall from the top. Behind C&C is Brothers in Arms: Road to Hill 30, another title making a re-appearance thanks to a Ubisoft re-release at a dramatically reduced price. Rounding off the four Ubisoft titles making the Top 10 this week is Prince of Persia: Sands of Time for PC and PS2, again thanks to massive price cuts.

Number 9 is where this week's only original Top 10 entry, Dr Kawashima's Brain Training, sits, marking an impressive 25 weeks in the Top 10 since its release on the DS 45 weeks ago.

Red Octane's Guitar Hero II, published by Activision, slips down the charts from Number 5 to Number 12 in its second week of 360 release. It seems that people aren't all that keen to play a game that offers either a duff controller or all-out console death.

EA's Sims add-on, The Sims 2: Celebration Stuff for the PC, hits the charts in its second week of release, coming in Number 19.

Next week, keep an eye out for the PS3 version of F.E.A.R., and Final Fantasy V on the GBA. In the meantime, if you see an original-looking game lying around your local retailer, give us a shout. But remember, the publishers are only going to sell what people are going to buy... so let's not get too self-righteous here. Comments? In the Forum below please - and remember, you no longer have to register to get your opinion seen.
Companies: Codemasters Electronic Arts Microsoft Nintendo Red Octane Sony Ubisoft
Games: Brian Lara International Cricket 2007 Brothers in Arms: Road to Hill 30 Command & Conquer 3: Tiberium Wars Dr Kawashima's Brain Training: How Old Is Your Brain? Guitar Hero II MotorStorm Pokemon Ranger Rayman 2: The Great Escape Teenage Mutant Ninja Turtles Tiger Woods PGA Tour 07

Yes - you are right. A slip of the keys from us, which we have amended. Thanks for pointing this out.

madjo 17 Apr 2007 11:21
3/7
the publishers are only going to sell what people are going to buy
But if the publishers only publish sequels, then the people can only buy sequels. ;)


yeah ... microsoft will take care of that carbuncle with its new intelligent anti-gaming component - vista

Tim Smith 18 Apr 2007 08:46
7/7
madjo wrote:
the publishers are only going to sell what people are going to buy
But if the publishers only publish sequels, then the people can only buy sequels. ;)

However, the point being made is that the charts are full of sequels and re-used IP. There are other games available that people are not buying. Maybe - as with music, film and literature - the majority of consumers just prefer security blankets over the stress of the new.

Maybe people just want to be sure that the money they are forking out for the latest thing is going to be assured of comforting quality.

I dunno. I just dig all this choice.