Apparently it's a benchmark for purity... 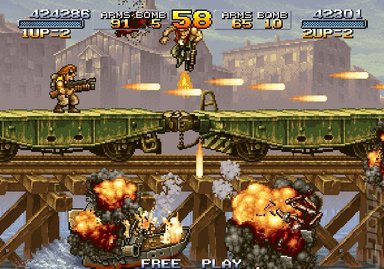 All Images (8) »
Following the PSP and Wii versions, the PlayStation 2 is now to be treated to a dose of Metal Slug Anthology.

On the off chance you've never heard of the series, Atari the publisher regards it "as the bench mark of side-scrolling purity, and (it)stands proud as one of the most important 2D platform-shooters on today?s current gaming platforms". We've got to say that we like it quite a bit, but we're far too English to gush quite that much.

The Absinthe Review Network 13 Apr 2007 18:51
1/1
I have the Wii version and it is outstanding. I've been playing them in order and have so far completed Metal Slug 1,2,3, and X. Tried 4 briefly but was interrupted. Grab a buddy and this is the most fun you'll have since Contra: Hard Corps on the Genesis. The pace is so insanely frantic and the soldiers are very smart; they will duck behind cover while tossing grenades over their shoulders, lunge at you with flying melee attacks, leap out of exploding tanks with rocket launchers...not your typical run-blindly-toward-you enemies!

And for anyone that is not willing to pay $40 for a couple of 2D games, keep in mind that when these were originally released on the on Neo geo AES home system, they were upwards of $300 EACH! So you're getting them for what? 97% off?

Pick it up and you won't be sorry!