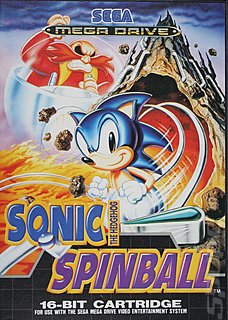 All Images (2) »
As tomorrow's a religious holiday and no-one at Nintendo will be going to work, SPOnG has the pleasure of bringing you this week's Virtual Console news early. Following the announcement of Mario & Sonic at the Olympic Games Nintendo and Sega seem to be a bit enamoured with each other. This week, Nintendo's offering up three '90s Sega titles; Sonic Spinball; The Story of Thor and Vectorman.

In keeping with the Easter theme, Sega's Sonic Spinball pits the spiky blue speedster against Dr Eggman. Well, it would be in keeping with the holiday spirit if that was the guy's actual name... Anyway, Dr Robo... we mean Eggman, has taken over Mt. Mobius, turning it into one giant mechanical base. Strangely enough, much of the base's inner workings are eerily reminiscent of a giant pinball table. Your job is to jump into Sonic's oversized shoes and destroy the base from the inside out. All it'll cost you to do it is 800 Wii Points.

Next up is The Story of Thor. It's an action-adventure title that stars Prince Ali (a mythical figure, not a boxer from Sheffield) who discovers a mysterious gold armlet. Rather than fetching a tidy sum at auction, it fetches four spirits. Ali must use them to stop a nasty chap with a similar armlet from causing death, destruction and other 'Bad Things'. If you want it, it's yours for 800 Wii Points.

And if those two ain't enough, Nintendo's serving up Vectorman. This space-faring platformer sends you off into the inky blackness to deal with the Orbots. Normally a pleasant enough bunch of cleaning robots, the Orbots have gone a bit screwy since their leader Warhead (an ominous name if ever we heard one) went loopy. Fortunately, as Vectorman, you're able to morph into oodles of cool stuff. Nintendo's asking you for 800 Wii Points if you fancy a crack at saving the galaxy.

dr_faulk 6 Apr 2007 14:20
1/5
Man, what the hell is with the VC? It's becoming a bit of a disappointment. They're releasing so many games that I've never heard of. I find Everybody Votes, News and Weather channels to be a lot more entertaining.

ajmetz 6 Apr 2007 15:31
2/5
Never heard of!? Wtf? Sonic Spinball was pretty well known, as the pinball spin off of Sonic, ...and I just completed Story of Thor 2 for the Sega Saturn last year. So to be able to play the prequel - that would be cool. Story of Thor was essential a Zelda-type action RPG, and the original is actually supposed to be better than the sequel, which only added a few new spirits and was largely just more of the same.

Vectorman, was one of the last Megadrive games, but it was also one of the last really good ones. Playing a bit like Megaman, it's a side scrolling platform shooter, I believe, and I remember reading the reviews in the gaming press at the time, all of which hailed it as pretty damn good. I believe there was a sequel also...but I'd have to check the SPONG database or else Wikipedia to be sure...

For the record though, I haven't played any of these games. But Story of Thor makes me want to get a Wii now. =P Although that said, Landstalker would be nice too...Climax?

LUPOS 6 Apr 2007 15:42
3/5
I actually have sonic spinball and vectorman in cart form sitting at home right now. Spinball is a good pinball game with some interesting platforming stuff mixed in. nothing special but as far as spin offs go its pretty good. Vectorman is pretty freaking awesome old school platform/shooter. somewhere between contra and mega man with some rather impressive for genesis graphics (it is prerendered a la donkey kong country, though not as impressive). It was design to be there counter to DK:C really.

Story of thor (legend of oasis here) was an awesome game. Basically a complete zelda rip that was actually very well done (and totally uses streets of rage sound effects!). the sprites are bigger and more realistic and the powers unlocked throughout are very cool and well implemented.

If you haven't played V-man and Thor are totally worth the money, spinball is a decent game but considering its simple premise might actually hold the most long term value over all. All good, more of a personal taste thing really.

Sonic Spinball to me was actually one of the coolest concepts ever created. I have been an old school arcade junkie and a huge fan of pinball since I could stand up, so the idea of a SONIC pinball game had me pumped-up. You could actually run around, jump and use spin-dash on scarcely-placed flat surfaces and there were these awesomely epic boss battles! I'll never forget when I finally made it to the last stage and just GETTING to the boss requires a memorization of the entire level, as you must be launched into space and if you miss the ship entrance port you will be falling blindly (unless you're smart like me and could remember the level layout below), potentially into a hot lava bath.

Sadly, for us die hard fans that actually KNOW how good these games are, there is really little incentive for us to purchase them as we all own them already! And at $8 a pop, even if we don't the physical carts are readily available for a FRACTION of the price on eBay.

However, I would pay a full $8 for rare titles (Blaster Master 2!!) or older games that required a battery back-up for saving that are dead by this time...

Svend Joscelyne 9 Apr 2007 18:10
5/5
dr_faulk wrote:
Man, what the hell is with the VC? It's becoming a bit of a disappointment. They're releasing so many games that I've never heard of.
Isn't that kind of the point though? To check out games from yesteryear that you missed? People have a thing for re-buying their cart games for Wii (me included) but it's a bit of a shallow argument saying the offering on VC is crap because you never heard of them.

For instance, I never really had a SNES, or a NES. I'm finally able to play all those games everyone raved about back in the day but never experienced. F-Zero was the first thing I bought from the service. I absolutely love the SNES Goemon game too. So yeah.

Not that there's anything wrong with preferring the other Wii Channels though - hey, to each his own.
Posting of new comments is now locked for this page.