Yup, it's a Minter Alert! 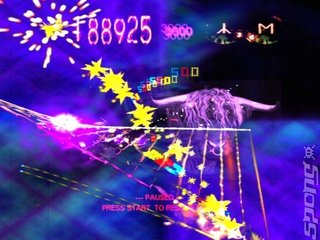 Space Giraffe
Llamasoft's Jeff Minter, the creator of the upcoming Space Giraffe as well as classics such as Unity, has expressed interest in developing for the Wii once he's had his fill of Xbox Live.

Speaking in an interview, Minter said,

?I love the Wii, and I'd love to work on it some day. It's just a question of marshalling the time for it. After we've done this, I'd like to get cracking on another Xbox Live Arcade game, but one day I'd certainly like to work with the Wii. The controller gives me plenty of ideas as to how you could incorporate that into a game.?

If you've played a Minter game in the past you don't need SPOnG to tell you that his gameplay-focused development style would be perfect for the pick-up-and-play ethos of the Wii. As he notes, however, there's still that matter of Space Giraffe to get onto Xbox Live.

So where's he up to with that? It's back from testing and looking good, apparently. ?All the results I got coming back from alpha test, all the guys just love it to bits. They're all saying that it's better than Tempest 2000, and it's better than anything that we've done," Minter said.

Discussing Space Giraffe (and reinforcing SPOnG's certainty Minter would fit the Wii like a silky glove) Minter likened it to the classics of yore, saying,

?I like the way a lot of classic games are designed. They were fashioned within such a small space, with such a small collection of behaviors that together added up to make something that was bigger than the sum of its parts. That's the kind of design philosophy I'm using to develop Space Giraffe, but it has to go a bit further, and it has to be much longer, deeper, and much more rewarding to today's audiences.?

But you know what they say, if a Llama stops walking... That is to say that Minter plans to continue pushing his craft forwards. He has ideas about the way music can interact with a game in the manner of Lumines,

?One thing I would like to explore in the future is making music more involved with the game, so that the type of music you put on would determine how the level played. Some music might create a more chilled level, whereas heavy metal and heavy techno might be more intense. I've got so many ideas, but we can't do them all on the first outing.?

Space Giraffe doesn't have a release date yet, but expect to see it in the not-too-distant future for 400 Microsoft points.

Fancy seeing Minter on the Wii? Cast your vote in the Forum.

how can a game that got canned be a "classic"?

As for Minter giving a hardware platform his backing, well, anyone remember Konix Multisystem, Muon or, for that matter, Jaguar? The guy is a legend, but he sure knows how to pick the turkeys (not saying Wii is a turkey)

how can a game that got canned be a "classic"?

It does seem an odd choice to label as a classic, especially as it appears very few people actually played it.

Jonti Davies 10 Apr 2007 16:01
3/3
I played Unity on a GameCube dev kit at Lionhead some years ago. It had no sound at that point, but it looked lush.
Posting of new comments is now locked for this page.