The fantasy flight-sim you've been waiting for... 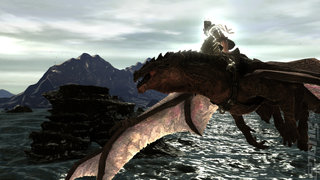 All Images (14) »
When these new screens for the upcoming Lair dropped into SPOnG's inbox we were suddenly whisked back to afternoons being bullied on the school bus for reading Anne McCaffrey's Dragonriders of Pern books. Not wanting to suffer the pain alone, we thought we'd show them to you.

As one of the games that's been playable on the PS3 for longest, Lair has SPOnG's thumbs itching to get flying. The fantasy-based aerial combat genre is, in SPOnG's opinion, much over-looked. Alas, it looks like we'll be waiting till September.

Coming from Factor 5, the folks behind the likes of Star Wars: Rogue Squadron III, Lair bundles you onto the back of a dragon and sets you off to save the world. You'll fight vast armies, try to stem the tide of impending doom, that sort of thing.

aside from this...i think that the ps3 is a highly capable machine, despite its short comings (the machine should have shipped with at least 1 gig of ram so that it could actually feed the ever so hungry cell and nvidia chips).

i know we are far from seeing what the ps3 can do, and i wonder if we will see its full potential but knowing how deep factor 5 gets into the hardwares architecture...i fully expect this game to be unmatched in terms of visual beauty. look at the f**king water ripples in the screen shots...on top of everything else going on. damn this game is probly going to be the showcase ps3 game when it comes out...to bad sony may bring too little too late to this gens party.