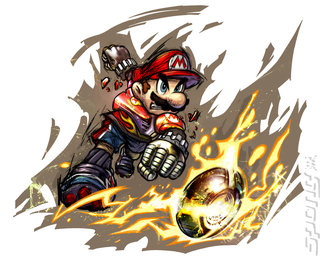 All Images (6) »
Call us paranoid, but SPOnG's worried Mario's turning into a jock. It looks like the first Mario game to hit these shores for the Wii will be Mario Strikers: Charged Football. Not only that, this is the first fully ONLINE game for Wii! Read on for details.

Nintendo's just announced that the game will be hitting shop shelves on May 25th across Europe. While Super Paper Mario has already hit the US, it has yet to find its way to European shores. It joins Super Mario Galaxy and Mario Party 8 in the ranks of titles Nintendo won't commit a date to.

While Mario Strikers: Charged Football isn't the Mario game we're really waiting for, it looks like it could be good fun. Granted, it's predecessor - Mario Smash Football on the GameCube ? didn't quite live up to expectations. But it also didn't have the Wii control system.

While various publishers have been dipping their toes in the Wii, we've yet to see a stab at a footy game. Hopefully Mario Strikers will be what its predecessor wasn't, the Mario Kart of football!

Most excitingly, in addition to the intriguing-sounding motion-controlled goal-keeping and other new control mechanics, Mario Strikers: Charged Football is set to be compatible with Nintendo;s Wi-Fi Connection, allowing you to compete against other players via the internet - providing of course, that you have their friend's code.

The news comes just over a week after the announcement of Mario's participation in the Olympics with Sonic. SPOnG's worried that soon he'll being coming round to 'rochambeau' us then steal our lunch money.

For more on Mario Strikers: Charged Football head to SPOnG's dedicated page. For SPOnG's interview with Sega and Nintendo about Mario & Sonic At The Olympic Games click here.

We should be bringing you a full preview of Mario Strikers: Charged Football in the very near future. On a related note, SPOnG's just heard that Nintendo has recently closed down the 'Wii House' in Farringdon, central London - which was used for media previews and PR events to celebrate the Wii's launch and first few months on the shelves (or not, as the case has been).

However, not to fear, as the company plans to open up a 'Wii Flat' in the very near future, for us lazy journalists to slouch about in pretending to work (read:play games) while blagging all of Nintendo's free lager of the big Wii fridge!
Companies: Nintendo
Games: Mario Strikers Charged Football

Joji 3 Apr 2007 17:52
2/2
Thought this wasn't gonna happen, it had been put off so much by Nintendo. Good to see it online.
Posting of new comments is now locked for this page.