Latest from our man in Japan 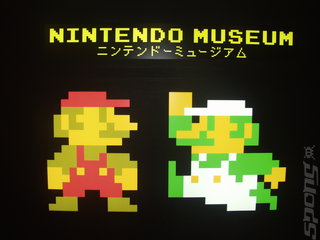 I spent Saturday afternoon in Osaka, Japan?s second city, wandering around a temporary Nintendo museum exhibition on the top floor of a large department store. It was perfect timing for Nintendo to do something like this, with Japan firmly in its grasp and DS Lite/Wii selling-out every week. And true to form, all ages and both genders (as well as some androgynous Kirby plushes) were there to see a first-hand account of NCL?s history.

Some of the items on display had come straight from Nintendo?s vaults, including Shigeru Miyamoto?s first hand-drawn designs of Jumpman and Donkey Kong. There were also copies of every first-party release in Nintendo?s home console and handheld history ? all brand new, but behind glass and out of reach.

It wasn?t just a selective history of Nintendo?s greatest achievements, though: the Big N also chose to display the Virtual Boy and its 1960s Love Tester machine. It was a great display and there was even chance to meet a life-size Mario mascot. Best of all, admission was free.

After that, I took the subway train across to Osaka?s Den Den Town. This is the Osaka equivalent of Akihabara, although for my Yen it has better retro shopping than Aki. There?s a shop called TV Game Revival on Den Den Town?s main street, which has a great MSX collection on the second floor (there?s also a playable Virtual Boy set up there, if you want to get red-eyed) and hundreds of game soundtrack CDs downstairs. The shop?s PA system plays retro soundtracks exclusively, all day long. That?s what UK game shops should do, I reckon: cut out the pop music right now. You?re selling games, aren?t you?

The whole game shopping experience in Japan is far superior to anywhere else. Even away from the hardcore retro scene, electrical megastores such as Yodobashi Camera do brisk trade in new games ? and they do it very well. Get yourself a member?s card and you can expect 10% discounts on everything you buy at Yodobashi, in spite of the fact they?re selling games cheaper than anywhere else to begin with. I bought a copy of Taito Memories Vol. 1 (arcade-perfect Bubble Bobble and Elevator Action Returns ? on the same disc) and Sega?s brilliant new Monster World Collection for about Y2200 (Ł9.40) each. Absolute bargains.

All in all, it was another great Saturday out in Osaka.

majin dboy 3 Apr 2007 13:18
1/1
do a compition to go.or alternatively send me over there to cover this story...again.please?
Posting of new comments is now locked for this page.