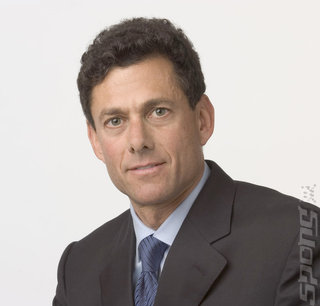 New chairman, Strauss Zelnick: serious business.
All Images (2) »
So, the Take-Two Interactive board meeting in New York yesterday did not result in any shock horror sale to Electronic Arts, Microsoft ? or any other company for that matter.

The new chairman, Strauss Zelnick, was previously president and CEO of current Tomb Raider developer, Crystal Dynamics - so there is some games industry experience.

It did result in the appointment of a new board ? this is based on directors of corporate turn-around specialist, ZelnickMedia. The new board is working with Paul Eibeler, former CEO and President of Take-Two, to ensure an orderly and effective transition.

Interestingly, aside from UGO networks Jon Moses (and ZelnickMedia?s ?advisory role? with Flash game developer, Arkadium) none of the new board has any real experience in gaming that we are aware of. What does crop up again and again is the expertise in other areas of entertainment (yes, remember, that?s what games are all about - see the new GTA trailer for proof!).

According to the official word on the matter:

??stockholders elected a new slate of directors to the Take-Two Board. The Take-Two Board of Directors now consists of Strauss Zelnick, Ben Feder, Jon J. Moses, Michael Dornemann, Michael James Sheresky and John Levy, who is an incumbent, independent director of Take-Two. Grover C. Brown, an incumbent, independent director, was also elected as a director at a meeting of the new Board of Directors held following the stockholders meeting.

At the direction of the new Take-Two Board, Strauss Zelnick, founding partner of ZelnickMedia became the new chairman of Take-Two. Since the formation of ZelnickMedia, Mr. Zelnick and his partners have led the successful execution of several operational turnarounds, including Columbia Music Entertainment of Japan and Time-Life.?

Those other board members are:

Michael James Sheresky: (board member) a senior vice president in the Motion Picture Department at the William Morris Agency. Sheresky focuses on representing major clients and developing business opportunities across the broad spectrum of the entertainment industry.

A further proposal to amend Take-Two's Incentive Stock Plan to increase the number of shares of common stock reserved for issuance under the plan by 2,000,000 shares was approved.