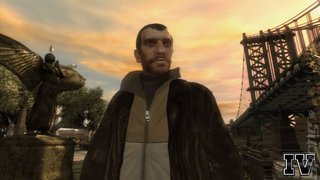 All Images (5) »
Well, here they are, the first GTA IV Screens. And SPOnG is pretty sure that you will be as pumped as we are to see that they appear to be set in New York City, with the unmistakable outline of the Empire State Building in the dusk-set background of one shot and what looks suspiciously very much like Times Square in another screen.

Check below to view the first, much-awaited GTA IV trailer - one of, if not perhaps the, most anticipated videogame ever.

Cynics out there are suggesting that the timing of this trailer - just a few days before fiscal '06 ends ? is set to bump up Take 2's stock which hasn't been doing so well of late.

Whatever, the level of expectation for this game is phenomenal. Let?s not worry too much about the (dirty) business involved in bringing the game to market, let?s focus on what?s important ? the game design.

Does it cut it?

Check the trailer below and let us know in the Forum what your first thoughts and feelings are on the look and feel of the game, the setting, the music, the characters and ? crucially ? if the trailer lives up to your expectations or not.

The aesthetic - not to mention the awesome Phillip Glass soundtrack - is clearly borrowed from the classic Francis Ford Coppola produced 'Koyanasqaatsi: Life Out Of Balance'.

The one single character in this first unveiling of the game seems to be of Russian descent, and simply states:

The 60-second trailer is entitled "Things Will Be Different" and shows off a number of NYC landmarks including the aforementioned Empire State Building, the Chrysler Building and the Brooklyn Bridge - nicely showcasing Rockstar's powerful RAGE graphics engine, last impressing us all in Rockstar Presents Table Tennis.

We love it. We can't wait. Let the hype commence.

billson 29 Mar 2007 23:56
2/9
I love how you play as an eastern european (i assume you play as him), adds more character instead of playing a hard nut american. he seems to have a troubled past and dosent seen 2 dimensional, i like that in my characters.
more comments below our sponsor's message

majin dboy 30 Mar 2007 09:55
3/9
looks fantastic,hope in-game looks as good. my gripe with gta is that since vice city its all gone a bit samey.when i completed vice city i thot to myself,yeah,that was really a great game but i hope the next one changes it up a bit.in my opinion san an was far too "drive to this blip" "shoot that blip" "drive back to the letter on the map to colect reward"

Joji 30 Mar 2007 12:36
4/9
I agree with Majin. Its sweet to have such an open and do anything kind of game, but its shot its self in the foot recently, when you can't focus on the normal missions because they lacked not being able to save anytime, unless a task was achieved. This got tired so structure the levels better this time.

Take this game online however and the series can go places Saints Row has touched upon. I think Rockstar should take some influence from Epic's GoW on how to expand things online and do it well.

Glad to see GTAIV, but don't rest there Rockstar, give us something else totally new too. CCE was great so build on that.

RiseFromYourGrave 30 Mar 2007 19:50
5/9
it seems a lot darker than the others, from that trailer. very interested on how this turns out, it looks great but i just hope they revamp the gameplay too, as others have noted it was getting a bit tired by SA. maybe the seemingly darker tone hints at a very different approach to the GTA franchise

vault 13 1 Apr 2007 06:57
6/9
All I want is to be able to sneak into someone's apartment, flee onto the fire escape, be chased by the cops over rooftops, duck into a flea market, steal some clothes, change identity and hijack a car and get away. The main character needs less restriction. GTA is probably one of the most restricted games ever. You can only really shoot, carjack, and run. And some people you can't even shoot. You can't climb much if anything at all (add spice to getaway missions), you can't really do any cool melee attacks (that would add hours of fun and new mission types like interrogation, coerscion, and fear), and your actions are meaningless. I don't like that the game wipes clean with every death. It leaves no care for your actions. I'd like to see you be able to crash a car into a random building and actually watch paramedics come by and clean up as well as the PD. Then everyday see the building being rebuilt. I'd like to see an actual population that can be completely wiped out. Everyone with daily schedules that you can completely f**k up. I'd like see noteriety with every action not just as you complete missions. Basically persistence. Oh and much improved driving physics. I think they'll need to do alot of that otherwise gamers will get disappointed. Anyone have any other gripes or wants for GTA?

RiseFromYourGrave 1 Apr 2007 16:31
7/9
i had always wanted proper gangwars in the GTA games. you should be able to completely destroy an entire gang. i always thought it was silly that you could dpend all day in little haiti or wherever killing hundreds of the local gang members without putting a dent in their presence. now obviously if it was very gang oriented, youd have to make the game so you cant just spend all day wiping them out, at least not at the beginning of the game, or itd be well too easy. simply making the police more sensitive to your crimes should stop that, but id leave the fine tuning to them :P. new gangs could form, or in a rare case, maybe if it was necessary to the story, rebirth. rival gangs could hire hitmen to take you out at any time, thered be personal vendettas between members of gangs and youd have a gang income, for which to buy stuff. gang members would for the most part furnish themselves with small arms but if you wanted a crate of m16s to create a small army youd have to do some serious drug dealing to make up the money, or if you are feeling super duper audacious, rob a barracks.

basically, i think death should be a bigger deal in GTA. not just when you die, as vault13 said, but when you kill. itd be a nice touch if when you knocked someone over in your car, just a civilian as you go about your business, there was a reef or shrine there the next day. the flowers would go bad over the next few days and itd eventually disappear. and maybe once in a while youd go back to the scene of such a road death only to see the streets blocked by hundreds of people paying homage - youd murdered a celebrity! hah

config 2 Apr 2007 14:15
9/9
There's no way this is NYC. Just look at the first screen shot - it's got the Empire State way too far south in SoHo or somesuch. That shot is taken from Portland looking over to Staunton Island. I'm in no doubt that this is simply a high-def realisation of Liberty City.
Posting of new comments is now locked for this page.