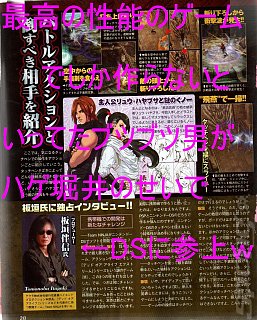 This week?s Famitsu, the Japanese gaming rag (or ?bible? depending on your POV), reveals that Tecmo?s Tomonobu Itagaki and his legendary Team Ninja (Dead Or Alive) are making a version of Ninja Gaiden for the DS.

Few details have been released so far, although the Famitsu piece does show that the game will feature an innovative 3D top-down view and will be played by holding the DS vertically, like a book (a la Brain Training).

A NeoGAF poster also reports that Ninja Gaiden Dragon Sword has been officially announced for release on Nintendo DS. See the scan from Famitsu previewing the game here (with thanks to NeoGAF and apologies for the big red Japanese writing over the scan - we've no idea what it means either).

Many are hoping for a return to the original gameplay values of Ninja Gaiden, with recent Xbox outings of the franchise being less than well received by hardcore fans.

Also, the whole game will be played using the DS?s touch-screen stylus, which has immediately split opinion here in the SPOnG office.

Some of us don?t mind using the touch-screen, while others argue that it is unwieldy and prefer to use the d-pad where given the option.

SPOnG will bring you all the official news and more on Tecmo?s Ninja Gaiden DS as and when we get it.

RiseFromYourGrave 28 Mar 2007 18:09
3/3
this is one of the best game announcements for me in recent memory. hopefully the action will translate well, id definitely appreciate an action game that uses the stylus so much and doesnt suck.
Posting of new comments is now locked for this page.