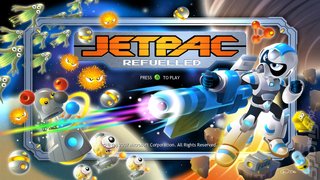 All Images (9) »
Jetpac Refuelled from Rare is set to hit Xbox Live Arcade on Wednesday. If you're not sure what to expect from a title that hasn't seen the light of day since 1983 don't worry, SPOnG's got some screens to give you an idea.

The game's a remake of the ZX Spectrum classic. It features a dash of next-gen graphical polish, new levels, new weapon upgrades and an online head to head component. For those of you wanting nothing more than to bask in the glory days of Ultimate Play The Game (Rare's precursor company) there's a straight port of the original game included in the package.

The game made an inauspicious splash into gamers' awareness, with its existence becoming apparent when it was registered with the German software ratings board.

Jetpac Refuelled will set you back 400 Microsoft Points.