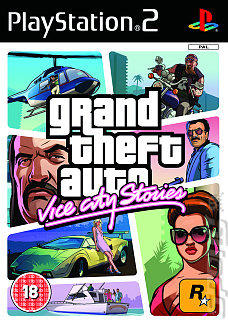 Overall, software sales see a 9% drop in units sold and 10% in money made. The good news (in certain quarters, anyway) is that the PS3's launch on Friday is likely to turn that around, at least briefly. Nintendo's platforms are the only two to see an increase in sales this week. The DS sees an increase of 4% in both units and value, while the Wii climbs 14% in both fields with a helping hand from EA.

The good news for Ubisoft is that although Tom Clancy's Ghost Recon: Advanced Warfighter 2 gets knocked off the top spot, it's not by a huge amount. It slips to Number 2, but there's only a difference of 196 sales between that and GTA: Vice City Stories. It's a different story to last week, when GRAW 2 beat out Final Fantasy XII by a whopping 14,013 sales.

Square Enix's PS2 exclusive, Final Fantasy XII, slips one spot to Number 3. It seems to be haemorrhaging sales, however, and sells nearly 10,000 fewer copies than last week. Maybe gamers don't find Patrick Stewart's dusky Huddersfield tones as appealing as you might have thought.

Sega's Wii-exclusive Sonic and The Secret Rings holds steady at Number 4. Sonic also gets a second outing in the charts this week, no doubt fuelled by The Secret Rings' success, with Sonic Rush on the DS making a re-entry at Number 33. SPOnG's preview of the Spiky Speedster's first motion sensitive outing can be found here.

This week's entry at Number 5 gets its placing courtesy to the Wii as well, as EA's Wii port of Tiger Woods PGA Tour 07 drives the title back into the Top 10.

Konami's Pro Evolution Soccer 6 finally drops out of the Top 10, sliding from Number 8 to Number 6.

The release of Test Drive Unlimited on the PC and PS2 manages to shunt it back into the Top 10, placing at Number 7.

There's a new entry on the DS in the form of Disney's Spectrobes which enters the charts at Number 23. EA's SSX Blur on the Wii performs somewhat disappointingly, coming in at Number 28.