Robbie Emerges From Rehab On To Xbox Live

Which market is Microsoft aiming at? 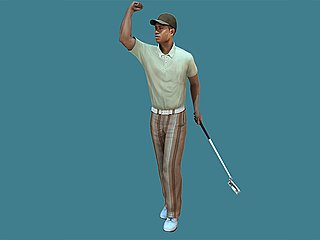 Robbie Williams enjoyed getting into Tiger Woods on the tour bus.
Microsoft is apparently looking at many new and varied markets to extend the Xbox Live demographic. First it was The Scissor Sisters at the Xbox Big Day Out and now bad/good/bad boy/man of rock/pop, Robbie Williams is making his music available on Xbox Live.

Williams is the incentive, of course, for the music video and other non-games content available at Xbox Live Marketplace. Apparently, the lad/bloke likes to while away his days playing games ? of the vide variety, ?Robbie Williams added, ?I love playing Xbox at home and on the road, Tiger Woods PGA Tour 2006 kept me company through the tour!?

Could having been constantly bunkered having made a bad wood from the fairway on the 12th at Sawgrass contributed to his recent stay in rehab? SPOnG is convinced that this is not the case.

According to Microsoft, ?From today, fans will be able to download videos of A Place To Crash, Lovelight, and his latest single She?s Madonna through the award winning Xbox Live online service.

The new single is a collaboration with Williams and ?80s gay music icons, The Petshop Boys ? so gods know what arch-conservative, Jack Thompson and the rest of the anti-game, anti-gay, anti-choice Christian Right will make of that.

We are expecting, ?Consoles turned our kids into latte-drinking, body-fascist, pre-verts!? press releases from middle-America within minutes of this story breaking.

That said, they?ll probably not be interested because, for now at least, the downloads are only available in Europe and Asia for now.

Svend Joscelyne 15 Mar 2007 11:36
1/2
The new single is a collaboration with Williams and ?80s gay music icons, The Petshop Boys ? so gods know what arch-conservative, Jack Thompson and the rest of the anti-game, anti-gay, anti-choice Christian Right will make of that.

It'll definitely raise awareness of Robbie in the US though, which'd be good news for him as he's been trying to crack America for years to no avail.

Also good to see he likes his games. Maybe he should have got on Live instead of that rehab lark.