SPOnG gets its Jedi on 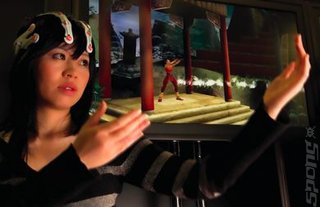 Wait! That's not Laurence Fishburne...
All Images (4) »
By Joe Chagan

You must have read SPOnG's recent GDC interview with Cliffy B, right? So, you know that the man behind Gears of War's more than a bit excited about Emotiv Systems' amazing new brain-based control system for gaming. After covering the kit's launch, SPOnG was too. We decided our man on the ground at GDC should get a closer look, and here's what he had to say.

May the force be with you

For as long as computers have existed in the heads of sci-fi writers we have dreamed of interacting with them with our minds. From legendary films like The Matrix to any number of horrible game-based horror B-movies, its an idea that simply grips us on some primitive level. The final frontier in game control would be to just think and have it be so. While we won't be 'jacking in' any time soon, according to what Emotiv's representative told me, we will be playing the role Jedi master within the next year, probably in games that already exist.

Research and experimentation into this sort of mind-reading magic has been going on for years. A close friend of mine actually worked for a few years on a project that would implant a small device within a person's brain and allow them to control a prosthetic limb. Obviously, with all the flack we already receive from the government and parents groups, we won't be implanting transmitters in our brains any time soon. I know, I'm bummed too.

But fret not! Due to amazing recent advances in electroencephalogram (EEG) creation the folks at Emotiv Systems are now able to make a simple, light-weight piece of head-gear that can read your mind. With a little calibration it does it well enough to have you lifting and shoving in-game items in real time. While I was unable to get an exact price point out of them myself ("less than a PS3," one rep chuckled) some of my colleagues informed me that they had managed to get one of the workers to 'fess up to an estimated price point of around $150 US.

We were given three demonstrations. One showed the developer interface and how the different brain information is tracked to demonstrate how responsive it is and how developers would work with the product. The second was a simple 3D game that had our guinea pig lifting, turning and shoving Stonehenge-like objects around to get them in their proper places.

The third, final and most relevant demo was actually a modified version of an existing game (whose name we were asked not to use). In it some of the magical abilities of the young protagonist were controlled by the head-gear while the rest of the controls remained mapped to a game pad. The creators of the product know full well that we will most likely not be playing entire games of Unreal Tournament with our minds. They imagine it to be best used to augment games when it makes sense. Just the thought of playing the forthcoming Wii Star Wars game with a Wii Remote light-sabre and the ability to actually force push with my mind gives me such a nerd chubby.

While you might initially bemoan such news, the fact remains that it's more an issue of the human mind working in such different ways than it is a technological limitation. Most who try it are able to "push" an on screen block after only two or three tries, but then to push it and then lift it and then spin it is just too much for a person to clearly visualize and therefore recreate for the computer to read accurately. Perhaps some day further down when we better understand the deeper working of the human mind such things will be possible. I for one will be pleased as punch to be able to be my own personal gravity gun in the not too distant future.
Companies: Emotiv
Games: LEGO Star Wars II: The Original Trilogy

DoctorDee 12 Mar 2007 18:26
1/1
When Sony showed the PSX to the assembled European development community in 1995, they showed a roadmap exteding way into the future. And on that roadmap, they had mind control for the PS3, or maybe the PS4 - I can't recall.

I can recall that we thought they were bonkers...
But then, at CES in 1995, I saw a perfectly acceptable 3D TV, and we don't have those yet...