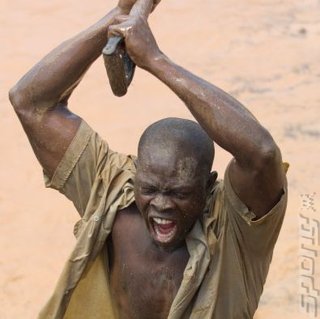 Rising star, Gladiator and a bloody diamond geezer, Djimon Hounsou... ready for Kratos?
All Images (3) »
God of War's director, David Jaffe, has stated his choice to play Kratos in a possible upcoming movie based on the franchise. Jaffe named Blood Diamond star, Djimon Hounsou, as his unequivocal first choice.

Speaking with Entertainment Weekly Jaffe said, “Djimon Hounsou as Kratos. Absolutely. You have to get past the fact that Kratos is Greek, but in terms of the way he looks and his acting ability and his physique — I can't think of a better choice.”

The film, although not quite a reality yet, has moved beyond the stage of being a fanboy's wet dream, “There's a really good script written by David Self, who wrote Thirteen Days for Kevin Costner,” Jaffe says.

However, experience tells – and Jaffe’s obviously read his Hollywood history, that things may not run as smoothly as a God of War launch, “I keep expecting them to call me and say it's dead, but my fingers are crossed. We'll be sending the script out to a huge-name director,” he comments – realistically.

Intriguing stuff - Hounsou's still a star on the rise at this point but he's already had two Oscar nominations for 'Best Supporting Actor' in both Blood Diamond and 2003's In America. Having been in Gladiator certainly doesn't hurt his credentials for playing Kratos, either.

SPOnG would certainly be happier with the choice than with the debacle that was Jason Stratham not being cast as Agent 47 in Hitman.

God of War II hits the shelves on April 13th over in the UK. You can see the latest trailer here and read about Jaffe's exploits at the Playboy mansion here.

in fact, the sin city/300 team should make the God Of Way game

in fact, the sin city/300 team should make the God Of Way game

mustakrakish 23 May 2007 06:11
4/6
YOU MUST CAST VIN DIESEL AS KRATOS OR YOUR MOVIE WILL FAIL. HE IS PERFECT THE RASPY HARSE VOICE. THE BUILD.THE ADDITUDE. ITS KRATOS IN PERSON!!!!!!!!.PLUS KRATOS IS NOT BLACK SORRY TO DISSAPOINT YOU.AND HES TO MUCH OF A SISSY ANYWAY VIN DIESEL JUST KICKS ASS

I've said it before. For Bond and for Agent 47, And I'll say it again... Jason Statham!