Motorstorm Online with PlayStation 3 ? First Looks ? Which Ports To Open 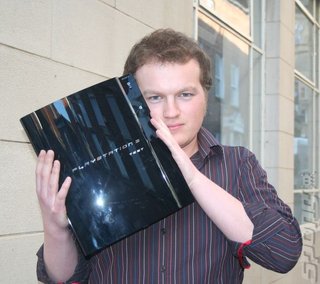 Mr Mark SPOnG: ready for action.
SPOnG went racing today, online with our PlayStation 3. Our mud-plugger (quiet at the back) sped across high-definition backgrounds as we and other UK journalists were treated to Motorstorm online.

It?s still too early for a full review of the game that Sony hopes to be the ?killer ap? for its next-gen beastie, but suffice to say that not only did we win, we also enjoyed the hell out of the experience. Stay tuned for the in-depth review later this month.

Getting the PS3 ready for online play ? albeit to a server set up specifically for this event ? turned out to be a reasonably painless affair. The most arduous piece of the entire process, in fact, was enabling access via our firewall. So, in the spirit of sharing, here are the ports that you?re going to have to make sure are accessible when PlayStation Network (and maybe even Home) rolls around.

Remember, we told you first:

Be aware that to get your old PS2 online, you needed to basically give the thing total outbound access (sort of, but it did need a whole swathe of upper level ports opened); so some of the above ports might just fall within a larger range.

Something which has got our nerd glands dribbling is the use of the Jabber port ? it is a well known port and we can?t see Sony wanting to stop your kids from chatting on Google Talk; could it be that Sony have decided not to re-invent the wheel and will be using the open source Jabber protocol for in-game messaging?

Bentley 10 Mar 2007 14:42
1/1
But if I live in a house with 2-3 other PS3 users, will it be possible to play online together? i.e. can I open ports to more than one PS3? All this ports business never used to be a problem when I lived with 3 other SOCOM online players. It only became a problem in later games for some reason.

Anyway, it will be a long time before all 4 of us have PS3s. We all want one, but aren't in a hurry until the rumble is fixed, and of course until MGS4 is released...