Complex physics say, "Back off, Newton" 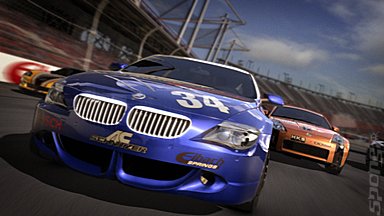 There was a lot to see today. First up, on my schedule at least, was Microsoft Game Studios' follow-up to its Gran Turismo-killing Xbox racer, Forza Motosports 2. While I personally have never been a huge fan of the sim racers - as I'm absolute trash at them - I have always admired the amount of technical wizardry that goes into making such realistic simulations. That said, the amount of physics simulation implemented in the newest iteration of Forza is far and away the most exciting part, for its fans at least.

The highlight of all this seems to be the amazingly complex tyre simulations; the developers have gone so far as to implement a multi-zone tyre temperature system that measures multiple sections of the tyre ? and therefore effects game play. The zones themselves even effect the temperature of the zones they?re in contact with.

Personally, I don?t know a blasted thing about how this helps, but the developers swear up and down that it leads to the most realistic simulation to date.

Another fun physics term the developers are bandying about regards some kind of "non-Newtonian physics" (e.g. some wacky shit not everyone agrees on, e.g. cutting edge) that only certain tyre manufacturers use when creating their products - and most non-game makers have never heard of or bothered with. In other words, these guys are full on bonkers for tyre physics.

Aside form the crazy physics shenanigans, the simulation in the game has been "turned up" a bit because the devs felt too many people were actually able to play the game well in sim mode - and the truth of the matter is that very few real people can drive a real car that fast and not die.

Beyond that is the car customization system that enables players to use up to 4,000 layers on their cars (vehicular myspace springs to mind) to make their vehicles look exactly like they want.

Now, at first the prospect of coming anywhere near that number of little decals may seem absurd ? well, the next little addition makes it all make sense. Forza players, who are Pros at making amazing designs or tweaked-out drive trains, can now lock their cars and sell them on the Forza auction block. The idea being that top level designers and tweakers can actually build recognition in the community and become a bit of a celebrity on their own.

I, as I mentioned, am terrible at sim racers and could almost never play the game; but I really love designing cars, so I could use it as a platform to share my work instead.

Bottom line, if you liked Forza, you will end up with sticky pants when it comes to Forza 2. And those of us who aren?t sim fans can actually turn on the assist for a more arcade experience or just spend all of our time making master chief stamps for people?s hoods. Top notch stuff.