Virtual Console and Xbox Live get their first crossover 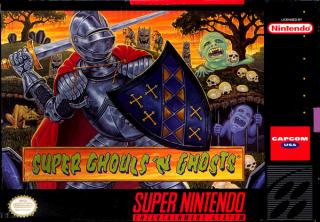 All Images (3) »
Nintendo's gone medieval on two fronts this week with its Virtual Console offerings. It has two medieval-themed games and one that's, well, it's from 1981.

Working chronologically backwards the imaginatively named Super Ghouls 'n' Ghosts is first up. Its first appearance was on the SNES in 1992 courtesy of Capcom. Players must jump into the armour of Knight Arthur as he embarks on a quest to liberate his misplaced (and ridiculously named) girlfriend Princess Prin Prin from hoards of the undead. Super Ghouls 'n' Ghosts costs 800 Wii points (Ł5.60).

Double Dungeons, hailing from the year 1990 is next up. Originally released on Turbographx by NCS, Double Dungeon takes up to two players on a mystery tour of 22 dungeons. Oh, and you can eat food, apparently. It'll cost you 600 of your Wii points (Ł4.20).

Finally, for all the seriously old-school (for 'old-school' you can read 'old' if you prefer) gamers out there we have Galaga. This arcade shooter marks the first time VC and Xbox Live have shared a game. The critically acclaimed collector's classic first made an appearance way back in 1981. It's a follow-up to Galaxian and had your Dad throwing 10 pence pieces into big things made out of wood like nobody's business. It's up to you to shoot down swarms of aliens and... well, that's it, really. Remember when games didn't need a complex story and hours of cut-scenes and great gameplay was all you needed? Galaga will set you back a modest 500 Wii points (Ł3.50).

It has to be said that this week's line-up joins Nintendo's US release schedule under the heading of 'uninspiring'. Fortunately SPOnG's still enjoying beating the snot out of trouble-makers on last week's offering of Streets of Rage, so don't think we're complaining.
Companies: Capcom NCS Nintendo
Games: Double Dungeons Galaga Super Ghouls 'N Ghosts