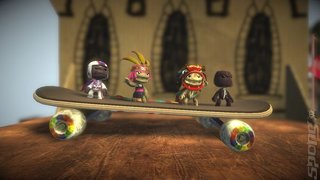 Project 8 for little people?
All Images (4) »
More details have been revealed about the upcoming hessian and corduroy-simulator LittleBigPlanet, developed by Media Molecule for Sony?s PlayStation 3.

Yesterday Sony dished up the first glimpse the game of in the keynote speech from head of worldwide studios, Phil Harrison. Now Media Molecule developers, Mark Healy and Alex Evans, have revealed some details on the game's evolution.

Sony's official bumpf on the game puts the emphasis squarely on creativity and the community aspects of the game. Phil Harrison said, ?By giving players the power to shape and share an entire virtual world via PlayStation Network, we've created the space for PS3 owners to realize their creativity and craft their own unique gameplay experience.?

A more in-depth summary of the game can be found on SPOnG's dedicated LittleBigPlanet page.

Speaking about the game in a little more depth in a talk following Harrison's keynote Healy spoke about the game's beginnings in Rag Doll Kung-Fu on the PC:

"It was flawed, it wasn't a perfect game, but there were some parts of it that I thought worked really well. In particular, I liked the ability to act with your characters... So that was one of the key things we wanted to take forward into the next project."

When Media Molecule was asked to meet with Sony following the game it found itself with one week to come up with something that would show Sony how Rag Doll Kung Fu might work with a controller. Studio co-founder Dave Smith came up with a hastily assembled prototype.

"We showed it to Sony, and they were amazing,? said Evans, who continued, ?This is honestly not bootlicking. We pitched, they were like, 'Yeah, we love it,' and all of the stuff in the briefing where we thought they'd say can you tone it down... The said, 'We love it, but can we have more of the mad stuff?'?

Asked whether LittleBigPlanet is aimed particularly at a younger audience, Evans replied, "It's not just a kids' game - we're not announcing anything about that, but user created content is all about breadth of content, breadth of ideas. So I'm looking forward to seeing that."

Are you excited about LittleBigPlanet? Is an offering from Sony that pushes the PlayStation network and doesn't just re-use old genres added incentive to buy a PS3? Let us know in the Forum.

OptimusP 8 Mar 2007 16:07
1/1
Cute little characters that interact with the world in very cute manners...now this how you win the hardcore Sony! And I'm dead serious!

It's the PS3's Pikmin/Elebits and that's a very good thing.