Day one of the Games Developers Conference - our intrepid reporter smells fear... 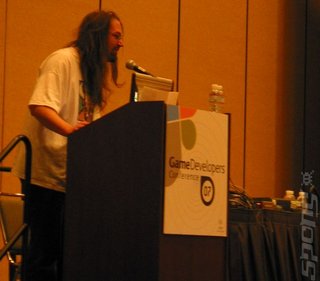 Jeff Minter in full effect even from four seats back!
All Images (13) »
By Joe Chagan

The year is 2007, the once peaceful city of San Francisco is under siege. Mobs of disgusting, disfigured, foul-odoured, barely sentient beings shamble around the downtown area creating havoc. Hippies left over from the heady days of the late 1960s? Nope, it's the Game Developers Conference, and those are just herds of programmers and journos, then? Well now it all makes sense.

SPOnG is in town and on the ground for all five "fun filled" days of the 2007 GDC in lovely San Francisco California, USA. Home to more game developers and publishers than you can shake a joystick at.

The first day of GDC - and usually the second for that matter - is generally pretty free of news for those of us on the ground. That said there are still generally a few interesting things that have to be experienced first hand and I will cover the "SPOnG: GDC '07 Daily Highlights!" I will, of course, be bringing you all the pertinent stories individually as the days go on.

That said, without further ado: "Highlights!".

This is the first year that the IGDA (Independent Game Developers Association) has held its own semi-separate conference alongside the GDC. Where as, in the past, it had some tutorials/talks/etc during GDC it now has its own full schedule of events including its own keynote.

When it came time to for those in charge of the IGDA to decide who would give their first ever keynote, someone who truly represented the independence they were looking for, no one could possibly be more qualified than legendary Llamatron creator, Jeff Minter. He is the walking embodiment of the earliest garage programmers. Long shaggy hair, long unruly beard and a bit of B.O. (the kind you can smell from four seats away) now classily associated with those great majestic text adventure craftsmen of yore.

However, back when his ilk was piecing together such old school classics as Space Invaders or Robotron, Minter was trying to find his own unique voice so to speak. He started off as most programmers do, mimicking the hits, learning how games tick. He wasn?t satisfied, however, to just emulate. He always attempted to improve on his inspirations. Be it adding in power-up to games like Centipede in the form of his first ever published game Grid Runner, to adding in random bizarre animals into everything he ever makes ever, he always strived to add his own flavour to everything he worked on.

In the past few years Music Games have made a huge surge into the spotlight of the game community but few people ever consider the father of interactive music. Back in the days when Commodore ruled the computer world, Minter created the first versions of what we now refer to as visualizations. Due to the limitations of the hardware, his vision of matching graphics to music was impossible. Not to be discouraged in 1984 he created Psychedelia , an application in which user input created colourful waves and flourishes than danced and undulated, intended to be played along with seperate music. A little Pink Floyd, (Psychedelia) and a recreational cigarette and you would have a great time.

Back to the present: during his keynote, Minter went through many of his games over the years including, Attack of the Mutant Camels, the visualization for the Atari Jaguar CD and even a version of Tempest for a never released DVD-game system. Leading up to the moment we had all been waiting for when Jeff eventually loaded up an alpha version if his latest and possibly greatest creation to date; Space Giraffe for Xbox Live! Arcade.

Following on the two major themes in all of his work, improving on other games, and interactive visualizations, Space Giraffe is similar is basic layout to Tempest 2000, and actually runs along with the "Neon" visualizer built into the Xbox 360. Besides the whole game being affected by whatever music you chose to play, certain enemies also interact with the visualisation in the background leading to some very clever and mesmerizing bits of game-play.

When we questioned Minter as to whether or not the 360 vision camera would also affect game-play because of its integration with "Neon" he commented that though he did create full interactive camera support for Neon, MS didn?t want to pay for it and the implementation it uses is "crap".

This is most unfortunate, not just because Minter?s version of camera support is no doubt more thorough, but also because the potential of waving one?s arms like a ninny behind a friend who is playing a game in order to disrupt his ability to discern the action on the screen just seems like a damn good time. This is what we get for dreaming.

All in all Minter?s talk and presentation was far and away the highlight of the day.

Another highpoint for this journalist was a 20 minute presentation in which shot clips of all the IGF's Design Innovation finalists were shown. While you may have seen the likes of Roboblitz and Castle Crashers bouncing around the Interweb for a while, most of the finalists were just as impressive, if not more so, in their creativity and graphics and in the fact that some of them were made by far fewer people.

In fact, the two most nominated titles Aquaria and Toribash were created by two and one people respectively. IGF?s website will get you to each game?s respective sites where you can get a better view and possibly even download some of the games if your feeling saucy. Just from the videos shown this reporter is most intrigued by Aquaria. A stunning 2D game that combines some of the most beautiful sprites I?ve ever seen along with a very Eco The Dolphin-like environment and game-play. We do wish all those involved the best of luck as we can all surely agree that innovation in the games industry is in desperate need of positive reinforcement. Be sure to check back here to see the results of the competition this coming Wednesday.

Well, that sums up our first highlight section. Be sure to check back tomorrow as I will be sticking my nose into every crevice of Microsoft?s "Gamers Day".

RiseFromYourGrave 7 Mar 2007 00:37
1/1
i wish he had actually called microsoft crap
Posting of new comments is now locked for this page.