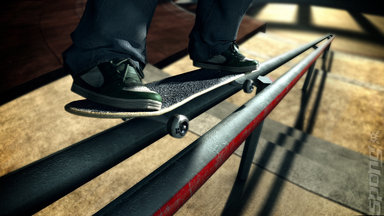 All Images (4) »
SPOnG?s been itching with anticipation to get a hands-on with EA?s next-gen SKATE ? due out later this year on PS3 and Xbox 360.

We finally did yesterday, and can happily report that SKATE is perhaps one of the most realistic sporting videogame experiences we?ve ever played. Not since picking up Virtua Tennis some years back on the Dreamcast, have we had that ?penny dropping? moment where you realise the developers have successfully managed to recreate both the look and ? crucially ? the feel of the experience.

Many of the attendees at yesterday?s unveiling of the game in oh-so-trendy West London were first and foremost skaters, not gamers, and SPOnG noticed one thing that happened on a few occasions when one of these guys picked up the Xbox 360 pad on one of the demo units for the first time.

They would spend a couple of minutes fiddling around getting the hand of the controls - basically, left analogue stick moves your body and the right stick moves your board for ollies and kickflips and so on ? and then there would be that moment where they ?got it? and a big grin would start to slide across their faces.

Interestingly, those who were familiar with the controls in Tony Hawks (?it?s not like that PlayStation game is it?!? noted one skater!) tended to take a little longer to ?unlearn? their control habits from that game.

So, added to the amazingly realistic and intuitive controls, is the fact that SKATE looks grittier and more realistic than ?certain other skateboarding videogames? plus it has already attracted input from a bunch of pro skaters including Danny Way, Mark Gonzales, PJ Ladd, Tommy Guerrero and more and one thing is for sure ? Tony?s got some serious competition!

And about time too.

Jay Balmer, Associate Producer on SKATE from EA?s Black Box studio in Vancouver told SPOnG yesterday all about the game?s design philosophy of ?by skaters for skaters?:

?That?s not just marketing. That?s kinda? well, it is our reality. Not everybody [on the team] is a skateboarder, but those of use driving the vision and that have been involved from the beginning are there first and foremost as skateboarders. So while it has to be a great game for gamers as well, which has involved taking on designers on the team who are gamers but not skaters? But as myself, I want it to be both a great game and a great skateboarding experience? so yeh, I?m a skater and I?m here to bring skateboarding to life ? not just for skaters, but for gamers too. We really hope everybody that plays the game gets that incredibly cool feeling of what actual skateboarding is like.?

Balmer also told us plenty about the game?s impressively realistic physics in SKATE:

?Well we really wanted to bring the actual feeling of skateboarding to life, so from the initial design stages we asked ourselves ?OK what controls do we want to press to recreate the feeling of an ollie?? ?what feels right?? ?what would I want to do to grab the board?? ?what makes sense??? So we really developed that organically so it feels right? so by building this great physics model it becomes accurate and it becomes something you can connect yourself to, because that?s what you know from reality you know? Everybody has jumped down a couple of stairs ? whether on a skateboard or just on their feet ? the in-game physics recreates these feelings? and it also ensures we can?t do anything too crazy! Physics is sort of our map!?

You can read our full hands on preview of SKATE later today, but in the meantime check out the full unexpurgated SPOnG?s interview with EA?s Jay Balmer.