Sony bounces out the good news ? after online spat 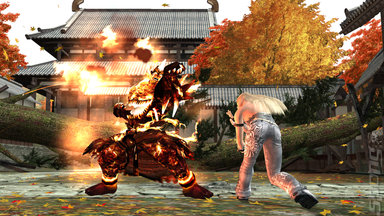 Tekken 5: DR - someone needs a slap!
Sony?s got more PlayStation 3 announcements today following an online, rumour-fuelled, PR-based ?exchange of views? last night, which saw the gaming community coming out in support of the freedom to publish.

First up is the actual release of Tekken 5: Dark Resurrection in 1080p HD resolution to the PlayStation Store for $20. Previously a hit on PSP and in the arcades, the game features ?visually customizable? characters; Arcade, Ghost and Versus Battle Modes; the ability to control boss Jinpachi Mishima for the first time. There is a also a new Gallery feature, used to download items including promotional movies and character ending movies, rare character images and in-game music ? all using Fight Money earned within the game.

Also available at the Store is a behind the scenes video from the Motorstorm team.

Next up on the good news front is the announcement of firmware update Version 1.54 for the PlayStation 3 in the US. Not a huge thing in and of itself, as the only addition announced is, ?Screen Mode has been added as an option in the options menu for video chat. The image of the person you are chatting with during video chat can now be changed to match the screen size. You can now use a compatible USB camera (webcam) compliant with USB video class (UVC) for video chat.?

What this does support, however, is a continued commitment by SCE to the online capabilities of the PlayStation 3.

This also came to the fore in an internet spat last night, during which Dave Karraker, senior director of corporate communications for Sony Computer Entertainment of America, threatened to pull support from blog-site, Kotaku (which stood its ground).

The rift emerged following the printing of a rumour? (declared as such) that Sony is going to announce ?PlayStation Home? ? a mix of Wii Miis and Xbox Live achievements ? as part of Phil Harrison?s highly-anticipated Game Developers Conference (GDC) address next week.

Fortunately for all concerned, the gaming community voiced its support for the ability to print news. This was shortly followed by Karraker backing down during a phone call. And now, peace reigns.

sneakyduck 2 Mar 2007 12:53
1/3
Just read the posts on Kotaku - man what a bunch of jerks. To me it seems they were trying to keep a lid on things to make a big song and dance when they were ready for it but did they have to be so assertive in trying to keep this - evidently now not so uncertain rumour under wraps. Why didn't they just reply with a nice "we don't comment on rumour or speculation" like they usually do? Seems desperate to me.

tyrion 2 Mar 2007 14:37
2/3
sneakyduck wrote:
Why didn't they just reply with a nice "we don't comment on rumour or speculation" like they usually do? Seems desperate to me.
If PR people at Sony had said "No comment" then the piece would have gone up anyway and any suprise at Phil Harrison's announcement would have been lost.

In Crecente's words "Sony asked us not to publish the story, first nicely, then not so much." They threatened Kotaku with blacklisting in order to try and prevent publication, not to have the piece removed. Once the piece was published, they followed through with their threat, something that is quite rare these days.

Then Kotaku posted the email exchange, in an obvious attempt to get sympathy from their readers and stir up some hatred fro Sony (as if much more was needed). In response, Karraker phoned Crecente and they had the whole thing sorted out in a few hours.

I think there wre faults on both sides, but the process was logical on both sides too. Sony should have gone with the "can you embargo until after Phil's keynote" approach, and maybe they did at first when they asked "nicely". Kotaku shouldn't have published the email from Karraker, they knew exactly what they were doing and it had nothing to do with "jounolistic integrity" it was all about stirring up s**t for Sony.

If Ziff Davis tried that they would never have premiers or exclusives again. Not that every news outlet should bend to a companies will, but Kotaku takes for granted what they do get for basically being a fanboy run tabloid.

Their blog is mainly rumor, editorials and bs for the most part, they shouldn't get press access just for living at home past 30 and loving one system over all others as they do.