Streets of Rage on Virtual Console

Plus Sword of Vermillion, Bio-Hazard Battle and Chew Man-Fu 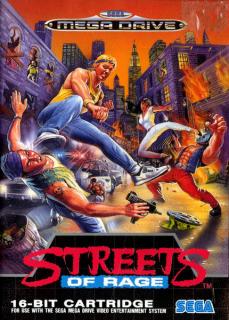 Wii-owning Sega fanboys across the land can rejoice today as classic Sega Megadrive beat-'em-up, Streets of Rage, has landed in the online Wii Shop for Virtual Console today.

Arguably the greatest side-scrolling fighting game of the 1990s (arguments are raging already here!) Streets of Rage, is set in an unnamed city where authority has been overturned (think Hackney!) and violence runs freely on the streets and stars Dirty Harry-style (ex)cops taking the law into their own hands.

If you want to see why we think this two player co-op be’mup is worth returning to, then you can download it now for a mere 800 Wii points (Ł6).

Finally, there’s a Turbografx title released today – Chew Man-Fu in which the titular Chew Man Fu is tasked with robbing the world of fried rice, egg roles and other favourite snacks!

There are 54 classic titles already available for the Virtual Console in Europe. If you have a Wii then you need to get involved.

If you’ve been playing VC games over the last few months let us know your general thoughts on the service in the forum. Do you, for example, think it’s better/worse than Microsoft’s Xbox Live Arcade download service?

HAVE to get wii, maybe at the end of march

Although having said that, the next wave of SEGA games (which will no doubt - nay, SHOULD - include Sonic 2 and Streets of Rage 2) are likely to make me crap my pants in excitement.

But if they're to do SoR3 somewhere down the line, could we please have the Japanese version and not the neutered US/UK version? :(

sneakyduck 2 Mar 2007 12:19
3/5
I hope everyone is keeping up with 1up's retro roundup with regard to the quality of these releases (sorry for the endorcement Spong!). They don't just review the game - christ that'd just be a copy and paste job - they also review the quality of the emulation which I find to be the biggest issue. That's the reason I've just bought a brand new, sealed PAL copy of Mario Kart 64 rather than the VC version - the emulation isn't perfect (it was only Ł20 as well, bargain!).

P.S. I know the SNES version left a lot to be desired but Final Fight was much better than SOR. Haggar FTW!

sneakyduck 2 Mar 2007 12:23
4/5
Oh - and I'm still waiting for the one title that I think is worth spending any money on to appear on VC. I own quite a few of the titles that are on there already so it's only really foreign / import games and titles I might never have played on Neo-Geo or other consoles that would get my attention as these were out of my budget the first time round - being a kid and all.