Electronic Arts On Your iPod

We bet that looks good on the dance floor? 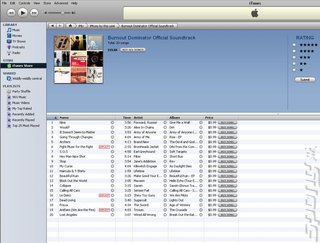 Games? Bah! They?re simply a vehicle for good tunes, you always knew that. Now Electronic Arts is out to prove it by putting soundtracks from such outings as Burnout, Need for Speed, The Lord of the Rings: Battle for Middle Earth II via an iTunes link on EA Trax.

Maybe EA?s Steve Schnur, Worldwide Executive of Music and Marketing at EA, is a little over-enthusiastic when he says, ?Our game soundtracks have now officially transcended their consoles. All songs, all mixes and all exclusives from all nations: if it?s in the game, it?s now available for fans to own. We consider this to be the next major step in evolving the music discovery experience.?

Basically, you go to EA Trax and you?ll find a list of games each with a ?Purchase From iTunes? button next to it. Actually, when SPOnG went today, we also saw a profile of the lovely, talented Lily Allen (comments to the Forum below, please).

According to the company, ?Today marks the world debut of the unforgettable version of The Doors? Riders on the Storm that Snoop Dogg remixed exclusively for Need for Speed Underground. The songs are live in North America today and will be available soon throughout Europe.

But then it all goes a bit ?record company executive just out of the bogs at a club? with EA claiming to have helped, ?launch the careers of such artists as Good Charlotte, Jet, Franz Ferdinand, Scissor Sisters, Arctic Monkeys and Fabolous?.

Welcome idea all the same.