What's New In The Arcades 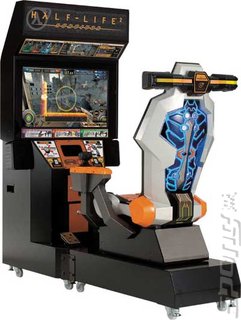 Half Life 2: SURVIVOR
By Kevin Williams

Well into 2007 and two major amusement shows down, for an industry that is meant to be dead there seems to be a lot of action. The big UK gaming show soon followed by the second largest Japanese event gave a flavour of arcade factory development and fashions, with driving games back, big interest in crossover with consumer and an upswing in the fighting genre.

The AOU Japanese exhibition surprised many with the biggest example of cross-over thinking. Konami Digital Entertainment presented Silent Hill: The Arcade, offering two-player gun action in new style atmospheric surround sound cabinet design. This new title appealing to the Asian mainstream is not the first example of high profile amusement cross-over in this genre (Gun Survivor), but offered a tantalizing glimpse into what?s to come- the preview on display is slated for a Q4 release.

Respected developer Taito launched Half Life 2: SURVIVOR for the arcades, with full network play, and an upscale cabinet with Dolby and wide screen. Using unique controls to surpass that achievable with keyboard sand mouse, was one of two arcade licenses from Valve.

In a special three-way partnership with Namco and Sega more than a year ago, Nintendo agreed to support arcade development with its GameCube console hardware. The latest game from this relationship was released this year with Mario Kart: Arcade GP 2, which takes the original console classic and adds amusement features of game storage cards, recording players customizable vehicles and a special NamCan feature capturing players image to place on-vehicle.

Not all the cross-over action has been from the Japanese, US developer Global VR has signed lucrative licenses with major publishers. Beyond its support of the EA label producing Golf and Driving properties, most recently the company launched Far Cry ? Paradise Lost, offering big cabinet machine-gun blasting action to the jungle romp - with the cabinet taking the game into a new direction. The company currently famous for its original development created the blasting fest Aliens ? Extermination, which has received strong cashbox - a game harking back to a more classic age of shooter with quality graphics.

Stay tuned for a report on the appearance of PS3 in arcade and the latest in shooting games from Sega.