Game Boys in Shoes? Whatever next?

We'll give you five pounds of real monopoly money for every pair of these shoes that turn up in shops. 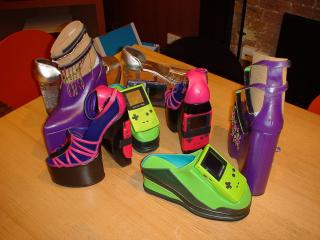 All Images (3) »
Something strange was happening at Nintendo when we visited this week. The company has seen fit to employ up and coming shoe designers Helen Red Richards and Paul Rees to create a range of strange and unusual shoes with Game Boys built into them.

?Nintendo?s Japanese culture has been a great source of inspiration with the design of these shoes,? said Zoe Clarke at Nintendo UK. ?The platform heels and cyber chick style are the height of youth culture and fashion in Japan. This look compliments the development and changing face of the Game Boy design over the past decade. The shoe project has enabled style and gaming to be incorporated together to create a unique and entertaining range of footwear.?

The shoes really are impressive at close quarters. It was difficult to tell whether the Game Boys are there to be played or just to be looked at. Each console is removable from its shoe, and each individual shoe has its own console. If they had incorporated link-lead shoelaces this would have made more sense.

?I don?t want to single myself out as an orthopaedic designer,? said the shoes? designer Helen Richards. ? However I do want to express that anything is possible in footwear regardless of different feet.? We?re not sure exactly what this means, but we liked the shoes anyway.