Get signed up for some hot multiplayer action... with a bit of luck 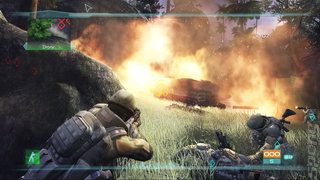 Now, we say Ubi? probably mean imminent because the release is 26th February (next Monday), which is pretty bloody imminent. However, it could mean ?eminent? because the game?s pedigree is so great.

Let?s hope, however, that when it does go live, is doesn?t do what last year?s Tom Clancy?s Ghost Recon Advanced Warfighter apparently did when it, ??blew up the next generation servers on Xbox Live?.

The demo will offer one map called ?Outpost? in both adversarial and co-op modes of play, and will support up to 16 players.

And, according to Ubisoft, that?s not all, ?Gamers who download the demo on February 26th will also have the incredible opportunity to be among a select group to challenge the developers (Red Storm) to some multiplayer action.?

You will need to submit their Microsoft gamertag and have a ubi.com account, and because entry is via sweepstake, you?ll either need some luck or to have the correct demographic credentials (that?s what SPOnG reckons, not what Ubisoft tells us), see?

?Sweepstakes will determine the winners who will be invited to play with Red Storm on the MP X360 demo on Feb 28th between 18h-21h GMT. To sign up for this please visit ghostrecon.uk.ubi.com/graw2/match.php.

Registration will stay open until, Monday the 26th, 18:00 and winners will be informed after this. The gaming session will be in English.