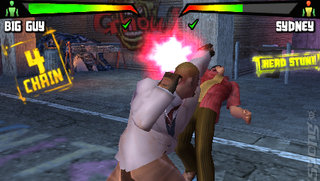 Screen from The Con
All Images (3) »
SouthPeak Games has announced two new titles that will hit UK shelves over the next two months: The Con and Monster Madness: The Battle For Suburbia. These join the recently announced Two Worlds.

The Con on the PSP's first up, hitting shops in March. Developed by Think And Feel Inc, SouthPeak promises "an interesting take on the fighting game genre, which encourages players not just to prove themselves the best on the streets, but to gain a fortune by betting on the outcome." ?

Next up is Monster Madness: The Battle for Suburbia on the PC. Developed by Artificial Studios, it puts you into the driving seat of every B/Teen Horror Movie you ever loathed (in a good way). In SouthPeak's words: "Four American college kids battle against hordes of the undead, despatching them with a collection of increasingly powerful - and bizarre - home-grown weapons."

These titles join the Reality Pump-developed Two Worlds, an RPG for the 360 due out in May.


? SPOnG does not condone gambling in any form.
? Except on the stock market. Capitalism is OK.