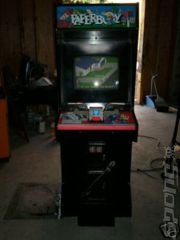 Midway arcade classic, Ancient arcade ?classic? Paperboy is set to hit Xbox Live Arcade tomorrow, which has caused a mix of excitement and disdain in the SPOnG office this morning.

Adam claims that it?s one of the best arcade games, like, ever while others in the office feel that a home console version might be missing something, not having the arcade original?s awesome bicycle controller cabinet (pictured).

If you are too young too remember the original arcade version of Paperboy then you may well have played on one of the many home console ports of the game.

Paperboy was originally ported to the Commodore 64, BBC Micro and Acorn Electron back in 1986 and, most recently, included in Midway Arcade Treasures a compilation of arcade games for the Nintendo GameCube, PlayStation 2, PSP, Xbox and PC in 2003.

The game, (as the historians among you are no doubt aware), involves you controlling a paperboy on a bike delivering newspapers along a typically American suburban street, while vandalising non-subscriber's homes and avoiding various hazards.

Along with Goonies and massive wide skateboards it?s a glorious reminder of all the best things about the 1980s. It wasn?t all Thatcherism, Miner?s Strikes and New Romanticism after all you know!

Paperboy will set you back 400 Microsoft points (and comes with the requisite free demo to tempt you back to the 1980s) and has been given the XBLA tarting-up by Digital Eclipse.

Watch out for it a 9am GMT tomorrow morning.

DoctorDee 13 Feb 2007 11:13
2/9
SPOnG wrote:
It wasn?t all Thatcherism, Miner?s Strikes and New Romanticism after all you know!
No, there was Grunge (and Goth) too!
And the birth of "designer" clothing - cheap tat made in Asian sweatshop, with some bloke (or bird)'s name on a tatty label.

Or are you (arguably, correctly) locating it at the birth of all those earlier, more obscure subpop bands?

I also suppose The Pixies and Sonic Youth etc. should be counted... though at the time it wasn't called 'grunge'... just good music.

DoctorDee 13 Feb 2007 11:50
4/9
zoydwheeler wrote:
I first heard the term grunge batted about when Nevermind broke...so wasn't grunge more of an early 90s thing?
Like Punk and Goth before it, Grunge was all over by the time it was mainstream. Medoly Maker and Everett True, had been going on about it for years by 1990. The definitive Sub Pop 200 album came out in 1988. Green River released their first in 1985. I saw Nirvana, Tad, Mudhoney in 88/89. So it might have been big in the 90s, but it happened in the 80s.

I've heard it said that Grunge was born on July 1st 1982, when Washinton state changed the legal strength limit of beer from 3% to 8%... and local guys in bands could finally afford to get wasted.

zoydwheeler 13 Feb 2007 11:50
5/9
Whatever anyways, Grunge Schmunge... I always preferred the Madchester scene myself, the fashions and the drugs and the music were so much more fun.

DoctorDee 13 Feb 2007 11:59
6/9
zoydwheeler wrote:
I always preferred the Madchester scene myself
For me, Madchester died in 1989 when me and Andy couldn't gaid ingress to a concert by the Stoney Roses at Leeds Polyversity.

I am, however, going to Manchester Vs Cancer next month to see various Madchester has beens being had.

the fashions and the drugs and the music were so much more fun.
The fasions were, you'll recall, 70s style loon pants. The drugs, it's true, were great.

But music... fun. Isn't meant to be about alienation and rage? I'm a negative creep. F**k me I'm sick. Hunger destroys me and picks bones clean.

I am, however, going to Manchester Vs Cancer next month to see various Madchester has beens being had.

Charlie Tans who I like, but don't love, and am in danger of having seen second most of all the bands I have seen ever. And they do give a f**king cracking live show.

The whole thing's about "one off's and collaborations", so I'm hoping for Tim Burgess singing and Hookey bassing with the Bunnymen on a cover version of Atrocity Exhibition (with Ian Brown on tamborine).

Or maybe a surprise appearance by the Savoy King Cocaine Band.

Joji 15 Feb 2007 22:11
9/9
Paperboy brings back so many memories of youth. Cutting school to go to the arcades and such.
Cool and very welcome to Live.
Posting of new comments is now locked for this page.