Wii Worldwide Online Play - Not Yet

Also, shooting people is now part of a marketing strategy. 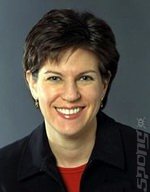 They shoot people, don't they? Nintendo's Perrin Kaplan.
All Images (2) »
In a recent interview at the DICE conference, Nintendo of America?s VP of Marketing, Perrin Kaplan, picked up on one of the most obvious Wii weaknesses: online collaborative play, stating that it is a, ??priority for Nintendo and you will see it? I think if we had just taken the whole package, here are all the channels, here are all the online games, here are the Miis, the news, the weather, I just think it would have overloaded the mass consumer. So instead we began rolling everything out in a fashion where people can really understand it ... We have more things coming, and online is definitely one of them."

Good news, because like many Wii owners we?ve now completed Zelda and there?s only so many more ?party? games -Wario (pictured below) excepted - and rounds of Wii Sports Golf we can take.

Bad news, in that there is still no definitive timeline aside from the ambiguous line that the company is making it a ?priority?. The fact that ? in a world where a three year-olds text their crčches with demands for double-decaf skinny soy lattes - we are being expected to believe that the reason Wii did not roll out with a full online armoury was because it would have overloaded our pretty little heads, is patronising to say the very least.

During the same interview, however, SPOnG's Clanger Award for hilarious and misjudged PR gaffes also goes to Kaplan. While discussing the different approaches to the PS3 and Wii launches by Sony and her own company, she told the interviewer:

"Well, we didn't have anyone in line that got shot waiting for our system. So there's one sign of the different approaches between our two companies ... I think Sony's efforts were in trying to get the core gamer to accept and adopt it, which for them in the PS2 era, spread to the mass consumer. I think we were just really prepared. Years of experience doing this ensured that we would have a very good launch."

Which begs the question, how does the fact that some members of the criminal underclass shot some people waiting in line for a PS3 (to obtain easy money for hard drugs and other badness) relate to the differences between Sony?s and Nintendo?s approaches to their recent console launches?

RIPRAW 12 Feb 2007 14:14
1/2
So in a couple of years, new consumers won't be overloaded by all these features? Or does she think everyone will already own a wii by the time online gaming unrolls? What a lame excuse.

RiseFromYourGrave 12 Feb 2007 16:54
2/2
"SPOnG" wrote:
Which begs the question, how does the fact that some members of the criminal underclass shot some people waiting in line for a PS3 (to obtain easy money for hard drugs and other badness) relate to the differences between Sony?s and Nintendo?s approaches to their recent console launches?

sony hires gunmen to shoot people in queues for their console and nintendo doesnt, of course. you reeeeally want stuff when youve been shot by the manufacturers, its an old marketing trick

wii-owners didnt get an entirely smooth ride though, as far cry vengeance was actually a game and not some kind of prank photoshopped goldeneye