And the moustachieod one is joined by Link 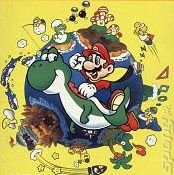 All Images (5) »
Three new Virtual Console titles go live on the Wii today. Super Mario World from the SNES, Zelda II: The Adventure of Link from the NES and Vigilante from the TurboGrafx (PC Engine) all join the VC line-up.

If you don?t remember anything before the death of Kurt Cobain allow SPOnG to enlighten you on the joys of these classics.

Super Mario World launched fat Italian plumbers into the 16-bit era. It featured Mario, Luigi, Princess Toadstool (or ?Princess Peach? if you go in for all this modern nonsense) and marked the first appearance of the cutest dinosaur of all time: Yoshi. It?ll set you back 800 of your basic Wii points. Which in earth terms equates to around six British pounds.

Hark back a little further through time and you come to Zelda II: The Adventure of Link. Breaking rank with its predecessor, The Legend of Zelda, the second instalment in the series featured side-scrolling and more RPG features (which would become staples of the series). Zelda II will cost you 500 Wii points.

And last but, well, kind of least, comes Vigilante, weighing in at 600 Wii Points (just over a fiver). Originally released by Irem for the TurboGrafx (PC Engine), this beat-em-up tasks you with fighting skinheads and rescuing Madonna. Madonna being your girlfriend. SPOnG doesn?t quite know what to make of that.

These releases join the 46 titles already available on Virtual Console. Nintendo tells us the service has notched up a rather impressive 1.5 million downloads so far.