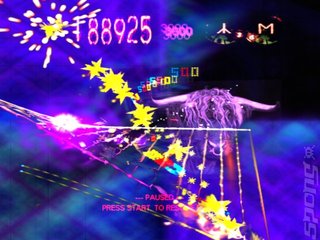 SPOnG, of course, loves Trip-A-Tron creator and notorious 'eccentric' Jeff Minter. Not carnally, you understand. It?s just that every time we hear some news from the famed loopy-brain Llama lover we are contractually obliged to tell you about it. Even if it?s that he?s decided that his favourite lager is no longer Stella, or that he?s going off pasties.

Our obsession and attention to Minter detail knows no bounds, so we meet this latest news on his forthcoming XBLA title Space Giraffe ? which we last told you about early in January and is somehow one of the greatest videogame titles ever ? with open arms and a warm, fuzzy, fast-beating heart.

Space Giraffe is based on an enhanced version of the Neon Xbox 360 light synthesizer visualisation software built into the 360, with gameplay said to be very similar to arcade classic, Tempest

The game has ?gone alpha? which basically means that Minter?s let it out of his West Wales? den and it?s gone over to some Microsoft boffins who will be responsible for giving it the ?yay? or ?nay?.

It?s always a rather scary time, even for the most seasoned/pedigree/long-in-the-tooth developer such as Minter, as he admits on his last blog entry:

I have 32 levels in now and I'm getting happy with it. I've been watching Giles play, and playing myself, and of course I can romp through all the levels so far, but goatdamn, I do know the thing inside-out };-). Watching Giles play I knw it's not trivial. In fact I think the difficulty is about akin to Llamatron, which I think is a good thing.

We're going for an alpha release to MS on Wednesday, then as soon as possible after to our alpha team, at which point I'll get a lot more feedback which I am looking forward to. The release to MS is a little bit scary because we effectively get the go/no go for the whole thing on this submission, but damn me if it doesn't look gorgeous and I think it plays really nicely so I would be very surprised if we have any problems there. Sure we probably aren't going to hit every TCR with alpha but we're not going for full cert yet, this is just show and tell so I think we should be ok :).

I'm really loving playing it. The last couple of nights we've had full on sessions on the big plasma and it just looks *lovely*. And it's wonderfully shooty, you get to blow a lot of stuff up very prettily without it being forbiddingly difficult, once you get your head round a couple of key concepts that make it not-just-Tempest-y :). I'm only at level 32 now, plenty of time to make the later levels really hard if I want to, plenty of scope for challenging new enemy types, but I want at least these early levels to be a nice fat slice of sweet gaming cake that *everyone* can sink their teeth into once they get the gist. And I think I've got that. It's really nice.

It feels to me like "this is to Tempest what Llamatron was to Robotron" and that is more or less what I was aiming for, so I'm pleased about that.

Looking forward now to getting the alpha team on it. With the likes of Sickers, Fuseball and Jedburgh on there I don't think I can have a better set of users to get feedback from really :).

I just know I'm going to end today with a big fat session on the plasma again. I'm just loving playing it now, to be honest.

And that is always a really good bit to get to when you're making a game }:-D.

More and more and more on Space Giraffe as soon as we get wind of it here at SPOnG. In related Minter news, we will catch up with him for an interview in the very near future. So, if there is anything in particular that YOU would like us to ask him when manage to tie him down, then just tell us in the forum below.

You know it's times like this that remind me just how important this guy still is.

We're all sitting there comfortably playing our supposedly innovative and graphically groundbreaking new games, and you think Minter's just pottering about in a shed somewhere, updating a game he released 30 years ago and adding the same old neon swirly lights to it.

Then this kind of story comes along to prove that what he's really been doing is..