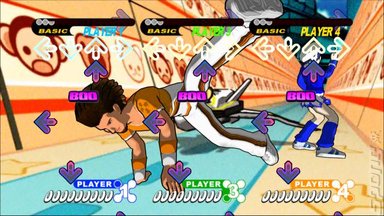 All Images (9) »
Great to see that Konami will be bringing the much-anticipated Dancing Stage Universe to the Xbox 360 later this year. Check out the first screens at the bottom of this story.

SPOnG just spoke with a Konami rep in the UK who confirmed for us that, ?Yes, the game will have online/Live functionality, with some aspects of online functionality still to be announced.?

The rep added, ?What we can say is that the game will certainly feature similar online/Live features to the Xbox version which was out last year ? which allowed up to sixteen people to take part in fun online dance-offs?.

The last Xbox version, Dancing Stage Unleashed 3 also included the customary Calorie Counter for use as part of a keep fit routine, as well as some incredibly tough CPU-controlled adversaries.

SPOnG will keep you posted on everything Dancing Stage related as and when we get it.

Konami also announced a Wii version of the game recently in the US, although that has still to be confirmed for the UK and Europe, so watch this space.