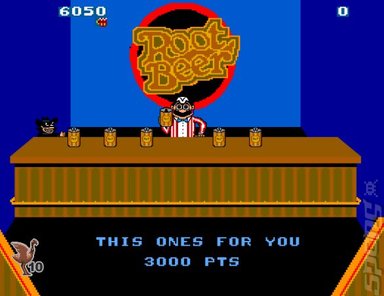 All Images (11) »
So, you thought that in-game advertising was something new to get worked up about. Think again, as Digital Eclipse?s, Root Beer Tapper, which is set to pop up on Xbox Live Arcade Marketplace tomorrow, proves that the whole area of commercialism has been with us for more than two decades.

Root Beer Tapper for XBLA also comes re-hashed with the requisite HD-overhaul as well as supporting online multiplayer, leaderboards, and achievements. It?s set to hit Arcade tomorrow at 9am.

The 1984 Digital Eclipse-developed version is an update of Midway?s 1983 arcader Tapper ? and was renamed Root Beer Tapper as the original game, which featured the iconic Budweiser logo on pretty much every screen, was deemed to be advertising alcohol to minors by the powers-that-then-were (i.e. El Presidente Ronald Reagan).

So, the major difference in Root Beer Tapper (which is almost identical to the Budweiser version) is that you play as what the Americans call ?a soda jerk? serving non-alcoholic root beer. For those of you who don?t know, root beer is a disgusting peculiarly American soft drink which taste likes it?s made of roots.

Root Beer Tapper on XBLA features four bars, with demanding and thirsty soda drinkers moving, increasingly faster, towards you, the soda jerk. You have to pour and serve drinks by sliding them along the bar to the drinkers. Should you fling a drink along an empty bar or should the advancing drinker reach you before you serve him his ?tasty? root beer, then you?ve had it.

Despite the booze-ban in this version, the game is still quality and you?ll be able to download it tomorrow for a mere 400 MS points. Bearing in mind that 2,100 MS Points in-store sets you back Ł18, this means that to make the full version of Root Beer Tapper come up your pipe will set you back around Ł3.43

To compare, this is about the cost of a cheap and not-very-fulfilling small cod and chips at our local chippy. Back in the rose-tinted past of the early 1980s that same chip-oil would certainly have had the original Tapper arcade cabinet, which was quite awesomely designed to look like a bar ? with a brass rail and drink holders; and a controller that looked like tap handles on a real keg.