The Charts: Retro Gaming Still Has It 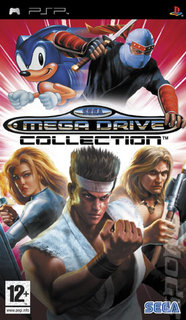 It's a quiet week for the charts, all in all, with no big releases to speak of and no shocking movement. What this week does show us, however, is that Sega fans out there are still a force to be reckoned with, as the Sega Mega Drive Collection ploughs into the Top 10 in all its retro glory.

Capcom's Lost Planet: Extreme Condition continues to freeze out the competition as it sticks hard to the Number 1 spot.

Konami's Pro Evolution Soccer 6 and EA's FIFA '07 don't see much change but do perform a switch. PES 6 climbs a place to Number 2 while FIFA '07 is supplanted and drops to Number 3.

Number 4 is where Sega Mega Drive Collection smashes into the charts, while also snagging the top spot in the PSP budget chart. Sega is amongst the four Japanese publishers that dominate the Top 10 this week. Sega, Konami, Capcom and Nintendo occupy six of the Top 10 spots between them.

Nintendo has two Wii-exclusive titles in the Top 10 with the excellent WarioWare: Smooth Moves climbing from Number 6 to Number 5 and Wii Play faltering slightly and shifting down from Number 4 to Number 7.

Fat Italian plumbers can celebrate as their top representative in the world of pop-culture bounds back into the Top 10. New Super Mario Bros bounces up from Number 11 to Number 8.

Things look a wee bit better for Nintendo's dog-fighting fox as Star Fox Command on the DS makes its first Top 40 appearance at Number 26 in its second week of release.

Other new entries in the Top 40 are Blast/Mastertronic's Little Britain: The Video Game (or: 'The Worst Game in the Village') in at Number 27 and Deep Silver's Vanguard: Saga of Heroes in at Number 34.

Next week expect entries from EA's The Sims Life Stories, bizarre movie tie-in Charlotte's Web from Sega, THQ's Avatar: The Legend of Aang (if for no other reason than it's on every platform under the sun so can't really miss), and (we really, really hope) Okami from Capcom.