Evil Has a New Home. 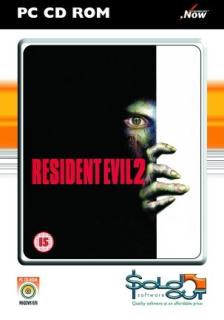 Now for less than a tenner
Previously published by Virgin Interactive, both games have enjoyed huge success. Resident Evil is hailed as the pioneer of Capcom's 'Survival Horror' genre mixing together an eerie atmosphere, puzzle-solving and genuine shocks courtesy of the walking dead, within a graphically stunning take on the haunted house scenario. Resident Evil 2 follows directly on from the events of the first game, but is set around a deserted police station in Raccoon City, with the same blend of game styles expanded into a more elaborate game as the series' zombie plague reaches epidemic proportions.

The agreement marks Sold Out's first deal with Capcom's newly established European HQ. Resident Evil will appear in the Ł4.99 Sold Out range in May with the more recent Resident Evil 2 making its budget debut as part of the premier Sold Out Extreme Ł9.99 selection in March. Both will be available in either DVD or jewel case packaging.

"Sold Out prides itself on releasing the best games at the best prices, but we have out-done ourselves with both Resident Evil games," commented managing director Garry Williams. "Both are legends in gaming circles and widely renowned as two of the most innovative titles to grace the PC. As such, they find themselves in excellent company within a label that also counts Tomb Raider, Grand Theft Auto, Championship Manager, Worms and TOCA as part of its Ł4.99 range."
Companies: Capcom Sold Out
Games: Resident Evil Resident Evil 2