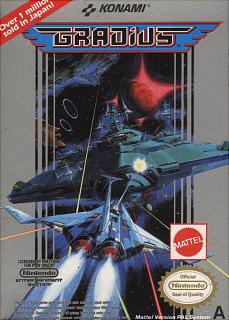 Gradius is a classic side-scrolling shoot em-up from Konami, first playable on the Nintendo Entertainment System.

You can see SPOnG?s original Gradius page here, just in case you can?t remember all the way back to the 1980s and need to know what we are banging on about.

This classic videogame will set you back 500 Wii points (Ł3.75) which is really not at all bad, if you consider that a bag of nappies costs more than that. For example.

There?s a bunch of Sega Mega Drive classics that have also popped up on your Wii today. Oo-er! When will typing that sentence ever not be funny?

Each of the Mega Drive titles will set you back 800 Wii Points (Ł6.00). The first offering is the highly amusing Bonanza Bros, a two-player platform game where players commit a series of burglaries as two bungling brothers.

Next up is arcade inspired action game Comix Zone, where up to two players progress through a comic book fighting bad guys to reach the next page.

Finally, up to two players can battle their way over 50 levels as one of twelve characters in the highly addictive Gain Ground.

As ever, you can check SPOnG's original game pages on all those titles by merely clicking on the links to the top right of this page. It is rather wonderful that these games are being pulled out of the archive and dusted off for a new generation of gamers. Hoorah for Virtual Console! Thank Nintendo it's Friday!

VC just goes from strength to strength, as does Microsoft?s equally impressive Xbox Live Arcade offering. Which really begs the question ? how can Sony compete in the retro-download arena? Of course they have the huge PS1 back catalogue to roll-out. But should they perhaps concentrate more on developing new downloadable games for the PlayStation 3?

On the PS3 front (over in the US) a downloadable multiplayer update for Blast Factor has just arrived for only $3, while Singletrac's classic PlayStation racer Jet Moto is now available to download and play on PSP for a mere $6.