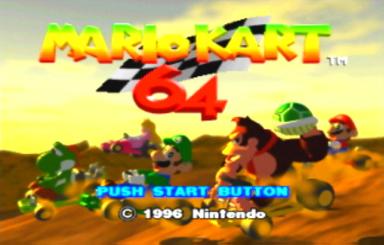 All Images (9) »
Life. It just gets better. When you wake up with a pounding hangover, a debt collector at the door, a nagging wife on the phone and a demanding boss wanting to know why you are slurring your words and are just about on the verge of giving up, Nintendo releases Mario Kart 64 to download on Wii?s Virtual Console for 1000 Wii points. Thank Christ for that.

1000 Wii Points is around seven quid or ten euros. Which is around two pints of expensive lager. Which is pretty much a no-brainer, click and get and play immediately.

Mario Kart 64 for the cost of two pints makes you reconsider the morning?s earlier options of either doing yourself in and/or running away to Thailand to escape the taxman. Which is altogether a good thing.

The Associated Press news channel also goes live today, so you can check out news headlines from across the world via a 3D globe, very much like the Wii Weather Channel. We?ll look at it probably twice, then never again. But it?s good that it?s there. If you are very bored then you might want to take time out to go and have a look at it. It?s not as good as google news, but it?s a new Wii thing, so it?s mandatory that you have to play with it.

Oh, and there?s also some other Turbografx-16 game out on Virtual Console today ? Soldier Blade which weighs in at 600 Wii points.

If so, I'm buying one. No question.

billson 26 Jan 2007 14:57
2/9
theyre trying to get the licence from rare and activision (who hold the current bond licence i think) if that happens, goldeneye here we come, tho the classic controller i think would be s**t for goldeneye, it certainly is for mario kart.
more comments below our sponsor's message

Besides, how awkward would it be to play on the GC pad, let alone the classic controller. Mario 64 and Kart can get away with the GC pad, cause I'm used to sunshine and double dash and the two of them just mirror their GC incarnation controls, but goldeneye, if I'm not using the z trigger for firing I dread to think what'd I'd be using.

Anyway, downloaded Mario Kart, just had my first race. Control on GC pad get a big thumbs up from me, though in comparsion with mario 64 which looked better then I remember it, I could swear MK looks worse, that and steerings a bit awkward (could be because I was using donkey kong) and I think there was slow down when I was using mushrooms.

billson 26 Jan 2007 17:04
4/9
yeh, i thot that as well, i think the framerate is a bit slower for some reaso, the only problem with the gc controller is that the R+L buttons have to be pressed in quite far to register them, thereby changing powersliding imo.

OptimusP 26 Jan 2007 17:51
5/9
in terms of licensing Goldeneye, they only need a deal with Activision. Nintendo at a point did own 100% of all Rareware IP. When Rare got sold to MS Nintendo allowed Rare to keep the rights of its own created IP like Conker and Perfect Dark. Nintendo did then hold power to not have Rare perfect Dark and Conker and so forth.

This was thanks to a elborate construction that consisted Rareware, it actually consisted of 5 companies, the main one Nintendo only hold 49% of the stock, the company in charge of Rare's IP and rights was owned by Nintendo for the full 100%.

Nintendo didn't do the prick thing which is probably one of the reasons Rare still holds the Big N in high regard.

soanso 28 Jan 2007 01:13
7/9
I don't see why Goldeneye couldn't come out.
The point about the controls is a good one. It'd need a bit of redoing for the VC simply to change the button layout to match the newer controllers.

But in terms of licensing, they'd need to pay EON for the Bond License and pay Rareware the profits for their software.
It may depend on what sort of deal Activison have with the Bond people but I don't see why it couldn't happen.

Mario Kart 64 was rubbish btw. I really didn't like that one. It was the track design. They were terrible. Only Wario Stadium worked for me, the rest were chronic.
You know what I'd really like to play, and this is the longest of longshots ever no doubt, I'd like to play one of the long lost N64 titles.
One that was touted around for a long time and then all of a sudden vanished.
Yes, I'm talking about Mother 3

billson 28 Jan 2007 03:15
8/9
wasnt personal, it was simply business, sure they are making diddy kong racing for the DS. Reggie seems awfully optomistic and i would like to be as well, goldeneye would be an awesome addition to the VC, tho i agree with the whole control issue.

billson 28 Jan 2007 03:17
9/9
Billson drools at the thought of ANY Mother game on the VC, thanks.
Posting of new comments is now locked for this page.