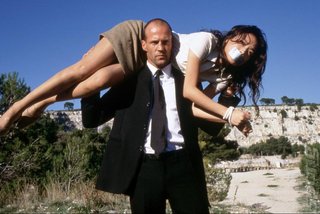 Our Jason - in his best suit... come on! It's a no-brainer!
Now, we’re sensible enough to know that our Hitman the Movie: Where the Hell is Statham? story from December 5th last year – combined with its Forum-supported campaign We demand Statham for Hitman movie!!! probably didn’t unseat Deadwood Star, Timothy Olyphant from the role of Agent 47 in the forthcoming Hitman movie – but we like to think it had some effect.

Because, MTV is reporting that Olyphant:
“…wants to set the record straight: He is not in the upcoming movie based on the "Hitman" video game. "God bless the Internet for putting it out there," he laughed, shaking his head. "That sounds like a fun job, but that's not a for-sure thing." Olyphant added that he's barely familiar with the game, and there's a good chance that he won't end up playing the deadly Agent 47. "I'm familiar with the fact that there's this dude in a black suit and a red tie with a bald head who just seems to probably kick ass," he said. "But that's about all I know."

There’s no confirmation that Crank star, Jason Statham, will get the role that he so obviously was born to play, so get voting in the Forum once again – and we’ll make sure that Luc Besson is informed.

Luc Besson? Yes, that’s right, as we reported back in December, the fabulous French filmmaker has been signed-up as a producer for Hitman – The Movie – sadly not as director. That said, Besson’s production credits include, Transporter II (starring our Jason), Taxi (the mad French version) and the great The Three Burials of Melquiades Estrada to name only three.

Besson’s got some track record with vide games – having worked on the Atari platformer Arthur and the Invisibles. However, according to an interview with MTV’s more mature sibling, VH1:
“I don’t know anything about video games.” He left the game to the minds at Atari and had literally no input. In fact, much of today’s technology mystifies him. Admitting he was a happy Luddite, he said, “I don’t have a computer. I don’t even have an email account.”

Doesn’t have an email account?! OK, then Luc - get on the phone to our Jason right now, demands SPOnG!