Oh, and a PS3 version too. Due March. 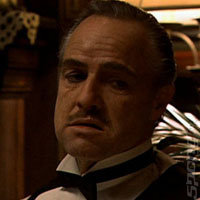 Both games are being developed by EA's Redwood Studios and will offer brand new content and features. The PS3 version will include The Corleone Expansion Pack with new gameplay and missions while The Godfather Blackhand Edition for Wii will feature ?an enhanced combat experience with motion-based Blackhand Control? which sounds a tad ominous.

From EA?s release just in:

The Godfather The Don?s Edition for the PLAYSTATION 3 and The Godfather Blackhand Edition for Nintendo?s Wii offer brand new ways to go from Street Soldier to Don as you gain control of the streets of New York. Follow the path an Enforcer or Operator; each with its own unique perks and abilities to earn. Now you can chat up specific characters to get the skinny on dirty cops, take down two additional revised compounds of rival Families, execute five new contract hits, and call in larger Corleone Hit Squads when the going gets tough. With The Godfather The Don?s Edition also having the new Shipyard and Railyard transportation hubs to explore and exploit; your path to the head of La Cosa Nostra is wrought with all new perils and excitement.

The Godfather The Don?s Edition takes full advantage of the SIXAXIS? controller for PLAYSTATION 3; manhandle your controller to manhandle your opponent. For improved, hyper-intuitive Blackhand Control in The Godfather Blackhand Edition, use gesture with the Wii-mote and Nunckuck to really beat down your opposition, or point directly at the screen using the Wii-mote for pinpoint firearm accuracy.

Is that a dead horse?s head in my bed or are you just displeased to see me?

Is Wii becoming a dumping ground for lack of innovation shooters, when developers should be looking at ways to use the controller?

Its starting to look like many are afraid to use normal controls on Wii (I mean a normal pad here).

Is Wii becoming a dumping ground for lack of innovation shooters, when developers should be looking at ways to use the controller?

Wii seems to be a general dumping ground at the moment.

Its starting to look like many are afraid to use normal controls on Wii (I mean a normal pad here).